New limits on the first moments of the Universe 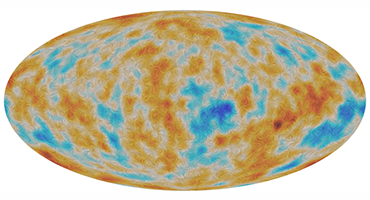 A new analysis of data from the Planck satellite has put constraints on the state of the Universe in the first trillionth of a trillionth of a second after its creation. There is no indication of the swirly patterns on the sky that would be a tell-tale sign of primordial gravitational waves, ripples in the fabric of space-time that are suggested to be made in an early epoch of cosmic inflation. We now know that gravitational waves can contribute no more than about 4% of the signals seen as variations in temperature at microwave wavelengths. While this does not rule out the idea of cosmic inflation, it means that we know that evidence to probe the Universe at these ultra-early times is going to be even harder to find. "We're going to have to work really hard on the next generation of experiments if we're going to uncover the signature of inflation," said co-author and UBC physics & astronomy professor Douglas Scott.

How the Universe came into existence, and how it evolved from a uniform condition to contain today's galaxies and other structures, are topics of intense activity among physicists. Observations suggest the existence of a phase of accelerated expansion (called "inflation") during the very first moments of cosmic history. Within this picture, all the structures in the Universe grew from early variations in density that were caused by the intrinsically probabilistic nature of quantum mechanics. If this picture is correct, then there's a deep connection between the very large and the very small, and the hope that we can one day understand the origin of literally everything. However, proof of these ideas has been very elusive.

The most enticing path lies in detailed study of the cosmic microwave background (CMB), a glow coming from the early Universe that can be detected with sensitive instruments that observe the sky at the same kinds of wavelengths that operate in microwave ovens (but fantastically weaker in strength). In particular the CMB is slightly polarized, looking a little bit different through different polarizers, just as a terrestrial scene looks different through polarized sunglasses as the glasses are rotated. If this polarization of the CMB contains a swirly pattern, like the sails of a windmill, then that would be evidence for gravitational waves being produced at the very earliest times.

In 2014 there was huge excitement when it appeared that a team using an experiment based near the South Pole, called BICEP, had detected this pattern of swirls in CMB polarization. However, checks using data from the European Space Agency's Planck satellite showed that the detected signals did not come from the early Universe, but rather were due to polarized emission from dust in our Milky Way Galaxy, which had not been properly removed. Now this new analysis of Planck data has resulted in images of the sky that allow these intervening signals to be cleaned away more carefully, hence enabling limits to be placed on the strength of any primordial gravitational wave signal.

The analysis was carried out by a team led by Dr. Matthieu Tristram of Université Paris-Saclay, and includes other scientists from France, as well as from the U.S.A., Canada, Norway and Spain. Their result based on Planck data, shows that the gravitational waves can contribute no more than 6% of the detected CMB signals. When combined with refined data from the BICEP experiment, the joint constraint is stronger still, at 4%. "This puts a direct limit on the energy scale of the physics that may have generated cosmic inflation" said Dr. Matthieu Tristram. Further searches are underway to try to detect this tell-tale polarization pattern at even weaker levels. These new results underscore how challenging the task is that lies ahead.