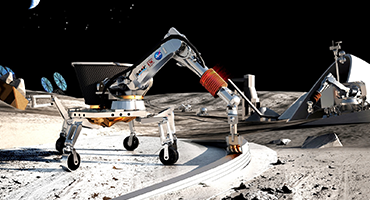 News Thumbnail Caption
Concept for robotic construction of buildings on the Moon. Lunar mining is envisaged to be necessary for developing such infrastructure. Credits: Contour Crafting and University of Southern California.

The lack of multilateral governance on space mining could spell trouble for space development and scientific research, according to University of British Columbia astronomer Aaron Boley and political scientist Michael Byers in an article published today in Science. Worse, it could be dangerous for existing space missions, satellites in orbit, and even those of us on Earth.

The U.S. is currently pushing hard for a right of commercial space mining unfettered by international law. In April, President Donald Trump signed an executive order that quickly led to bilateral negotiations being opened with NASA partner states. This bilateral approach, together with the fact that the U.S. is the licensing nation for most of the world’s space companies, could make the U.S. the de facto gatekeeper to the Moon, asteroids, and other celestial bodies.

Boley and Byers said, “Other nations need to speak up, now.”

Why is it critical for space activities to be governed through a multilateral approach, instead of the unilateral/bilateral one preferred by the U.S.?

“If you have national regulations only, you risk creating a race to the bottom, where different countries compete to attract space mining companies to incorporate within them by offering reduced regulatory standards and laxed enforcement,” explained co-author Michael Byers, professor of political science at UBC.

Loosely regulated space mining activities could hinder the efforts of scientists to better understand our universe and to generate knowledge that will help future space missions. Boley and Byers pointed out in their article, “Analysis to maximize resource yields is not generally the same as that needed for understanding the Solar System”.

Another example comes from a 2019 mission by the Israeli nonprofit SpaceIL, during which a robotic lander crashed on the Moon. Unbeknownst to SpaceIL, its partner - the Arch Mission Foundation - had placed thousands of tardigrades (microscopic water bears known to survive very extreme environments) on board. Although the tardigrades are unlikely to survive very long on the Moon, it is their surreptitious inclusion on a space mission that raises the most concern.

Loose regulation could also result in safety hazards, especially considered that mining operations will happen in a low gravity, low escape velocity environment. The resulting debris could impact other space missions, while the removal of mass from an asteroid could have truly cataclysmic consequences. “In a worst-case scenario, a trajectory change resulting from mining could eventually lead to an Earth-impact emergency,” wrote Boley and Byers.

Boley and Byers do not oppose all space mining, which they consider essential to deep space exploration missions. Aaron Boley, co-author and associate professor of astronomy at UBC, emphasized. “Rather, it is the governance model being pursued and its implications for the sustainable development of space and the associated treatment of risks that we believe deserve closer scrutiny”.

Here is a video of Byers providing a summary of the Science article.