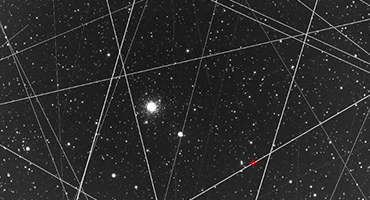 News Thumbnail Caption
Each streak is due to the light of a satellite that moved through the telescope’s field of view during a two-hour observation. Credit: Rothney Astrophysical Observatory, University of Calgary.

The planned launch of thousands of communications satellites over the next few years is expected to have the most impact on our view of the night sky over many cities in Canada including Calgary, Regina, Vancouver and Winnipeg.

Researchers at the University of Regina, UBC and University of Toronto have determined that, due to geometry and selected orbits, these satellites are expected to generate the most light pollution near 50 degrees latitude North and South.

“The launch of thousands of communications satellites currently being planned over the next few years will have a devastating effect on research astronomy and star gazing worldwide,” said Dr. Samantha Lawler, Assistant Professor of Astronomy with Campion College and the Department of Physics at the University of Regina and lead researcher on the project. Dr. Lawler is also an alumnus of UBC Physics & Astronomy (PhD).

Predictions for the optical brightness and on-sky distributions of Starlink, OneWeb, Kuiper, and StarNet/GW, were used to model the impact of an estimated 65,000 satellites, as seen from different places on Earth, in different seasons and times of night.

Several companies are planning to launch megaconstellations of thousands of communication satellites, which would increase the number of active satellites in Low Earth Orbit at least twenty-fold in the next few years. With almost 2,000 satellites SpaceX's Starlink is currently the largest planned and is adding 60 new satellites every two to three weeks.

“While orbital infrastructure has many potential benefits, such as helping provide internet access to rural and remote locations, when deployed recklessly, it could limit humanity’s ability to develop Earth orbits or observe the cosmos,” says co-author Dr. Aaron Boley, Canada Research Chair in Planetary Astronomy and Associate Professor at UBC's Department of Physics and Astronomy. “Development must be done in ways that do not prevent others from accessing space or viewing the wonders of the night sky.” 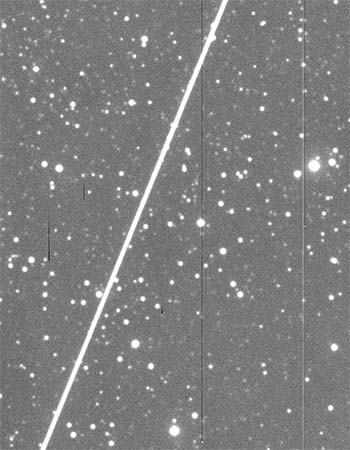 Recent images of satellites moving across the sky, as seen by
the Plaskett telescope in Saanich. Credit: Boley/Balam/DAO.

The proliferation of new satellites will also contribute to atmospheric pollution, both on launch and re-entry, and drastically increase the very real threat of Kessler Syndrome. This syndrome describes a scenario where the number of objects in Low Earth Orbit is high enough that collisions between objects creates a cascade effect where each collision generates space debris that increases the likelihood of further collisions. This debris could render space activities and the use of satellites in specific orbital ranges impractical for long periods of time.

“As with any new technology, it’s important to analyze all of its possible impacts,” says Dr. Hanno Rein, co-author and an associate professor at the University of Toronto Scarborough. Unfortunately, he says much of this work wasn’t completed before the satellites were launched into space.

“You cannot escape this technology, whether at the North Pole or the equator, you will always see these satellites above you. This is such a fundamental change to our view of the sky that it requires greater scrutiny.”

“The research should be part of a larger dialogue, seeking cooperation among astronomers and satellite operators,” said Dr. Boley. “What we seek is a sustainable path forward, which allows the development of on-orbit infrastructure without causing unmanageable risks to operations in Earth’s orbit and environment, and does not cause substantial interference with research astronomy and public stargazing.”