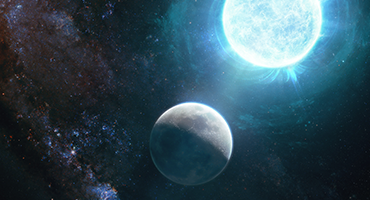 Caltech and University of British Columbia (UBC) astronomers have discovered the smallest and most massive white dwarf star ever seen—at 4,300 kilometers across it’s just larger than Earth's moon.

Though the white dwarf is small, it is heavy, "packing a mass greater than that of our sun into a body about the size of our moon," says Dr. Ilaria Caiazzo, an astronomer at Caltech and lead author of the new study in Nature. She is also an alumna of UBC Physics & Astronomy.

White dwarfs are thought to be the last evolutionary stage of stars whose mass isn’t great enough to become a neutron star or black hole. If the dead stars are massive enough, they will explode in what is called a type Ia supernova.

In this case, the newfound white dwarf, named ZTF J1901+1458, is the result of the merger of two less massive white dwarfs. Because the sum of the masses of its progenitor stars was just below the mass at which they would typically explode, the merger produced a white dwarf about 1.3 times the mass of our sun.

“This is a very important test of the theory of white dwarf stars,” says Dr. Harvey Richer, an astronomy professor at UBC and author on the paper. “Current theory holds that the more mass a white dwarf star possessed the smaller it would become. This is completely the opposite of what one would normally think but is due to the nature of matter under very high pressures. A white dwarf half as massive as ZTF J1901+1458 would be more like the size of Earth as opposed to that of the Moon.”

The team think that the merged white dwarf may be massive enough to evolve into a neutron-rich dead star, or neutron star, which typically forms when a star much more massive than our sun explodes in a supernova.

"This is highly speculative, but it's possible that the white dwarf is massive enough to further collapse into a neutron star," says Dr. Caiazzo, who earned her PHD at UBC. "It is so massive and dense that, in its core, electrons are being captured by protons in nuclei to form neutrons. Because the pressure from electrons pushes against the force of gravity, keeping the star intact, the core collapses when a large enough number of electrons are removed."

If the formation hypothesis is correct, it may mean that a significant portion of other neutron stars take shape in this way. The newfound object's close proximity (about 130 light-years away) and its young age (about 100 million years old or less) indicate that similar objects may occur more commonly in our galaxy.

“Because it is so small, we know ZTF J1901+1458 lies within a percent or so of the maximum mass that a white dwarf can have, the Chandrasekhar mass,” says UBC astronomer Dr. Jeremy Heyl, author on the paper and Canada Research Chair in Black Holes and Neutron Stars.

“If it manages to accrete even a small amount of matter, it would collapse, perhaps producing a supernova or a neutron star.  As such it provides a look at how Type Ia supernova work, which astronomers are still striving to understand.”

The discovery was made by the Zwicky Transient Facility, or ZTF, which operates at Caltech's Palomar Observatory. Other telescopes helped characterize the dead star: the 200-inch Hale Telescope at Palomar, the WM Keck Observatory's Keck I telescope, the European Gaia space observatory, the University of Hawaii's Panoramic Survey Telescope and Rapid Response System, and NASA's Neil Gehrels Swift Observatory.

The white dwarf ZTF J1901+1458 was spotted by Kevin Burdge, a postdoctoral scholar at Caltech, after searching through all-sky images captured by ZTF.

"Fast time-domain surveys like ZTF are powerful tools for studying phenomena on extremely short timescales, such as this object, the most massive white dwarf known, which completes a full rotation every few minutes," says Burdge. In 2019, Burdge led the team that discovered a pair of white dwarfs zipping around each other every seven minutes. "No one has systematically been able to explore short-timescale astronomical phenomena on this kind of scale until now. The results of these efforts are stunning."