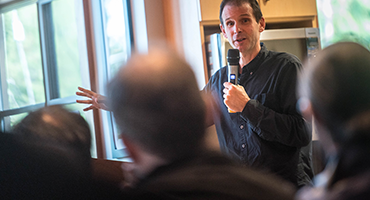 (via SBQMI) A team of researchers including UBC Physics & Astronomy professor, SBQMI’s Joshua Folk was awarded the equivalent of CAD $20 million to develop a new approach for investigating new phases of matter that emerge in quantum electronic devices. The project, Entropy in engineered quantum systems—Mesoscopic thermodynamics of correlated quantum states, will receive the funds through a European Research Council (ERC) Synergy Grant; ERG Synergy Grants recognize ambitious, collaborative projects, and this is the first time a Canadian team has received funding through this program.

The project is based on the measurement of entropy in isolated quantum states, an area in which Folk, Professor in the Department of Physics and Astronomy at UBC, has unique expertise. Reflecting the intersection of these two concepts in physics, the project goes by the name “Quantropy.”

Entropy is a metric of thermodynamic heat capacity—essentially, how much heat must be added to an object to raise its temperature by a certain amount. This quantity is easily accessible in everyday materials but is exceedingly difficult to measure in engineered quantum states, such as those that might be the basis for future quantum computers.

Different materials have different heat capacities, reflecting differences at the microscopic level. In conventional materials, these microscopic details have been understood for over a century, but in quantum materials, the electrons interact so strongly with each other that new (and often poorly-understood) states can emerge. In many cases, these hold the potential to form the basis for a range of future technological applications, from new technologies for conventional electronics to new architectures for quantum information processing.

In order to understand the exotic electronic states found in quantum materials, this team of researchers spanning four countries will devise new ways to measure their thermodynamic properties by creating them in quantum electronic circuits, which are similar to the transistor in a computer chip but measured at temperatures close to absolute zero.

“We start from electronic circuits that, fundamentally, are not so different from those that live in your computer—they share many of the same components and functionality; they’re built in the same way but much simpler,” said Folk. “The degree of control that’s possible in electronic circuits allows us to study in greater detail the physics seen in quantum materials.”

“The heat capacity, or entropy, of single quantum states is normally too small to measure, but we have found a way around this roadblock,” said Folk. “Our new approach gives us a very powerful tool to probe some of the most exotic states known to emerge in nature—and even some states that are not known to exist in nature but that we can create on an electronic chip.”

Folk’s team will build electronic circuits on chips using interesting 2D materials, like graphene, as well as more conventional materials, like silicon. The researchers will then measure the entropy of these states in order to understand them at a deeper level.

Nearly a decade ago, the Quantum Devices group that Folk leads at UBC began an experiment to measure entropy at the level of single electrons, leading to a recent publication in the journal Nature Physics and setting Folk and colleagues on the path to this new project.