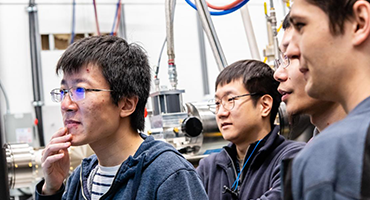 Quantum materials are the basis for many emerging quantum technologies, but the extent to which individual elements are understood depends on scientists’ ability to produce these materials in the laboratory and study them. 3d transition metal monoxides, a class of compounds, represent a well-studied family of quantum materials that exhibit some fascinating properties. Physicists study them in a systematic way, from titanium oxide (TiO) to nickel oxide (NiO) as the number of electrons in d orbital ("the correlation strength") increases. Interestingly, it was previously not known whether TiO is a metal that conducts electricity, or an insulator; this is due to the difficulty in developing a pure TiO crystalline sample for study.

Now, a collaboration between UBC Physics & Astronomy Professor George Sawatzky’s and Assistant Professor Ke Zou’s teams at the Stewart Blusson Quantum Matter Institute at UBC, and teams at the Canadian Light Source (CLS) in Saskatchewan, with support from partners at Yale University, Brookhaven National Lab, and Chinese Academy of Science, has resulted in new clarity around the intrinsic properties of TiO. Published January 8 in Science Advances, these results resolve a lingering uncertainty around the behaviour of TiO, revealing that it behaves similarly to its metal counterpart titanium, distinguishing it from other transition-metal monoxides.

"We demonstrate with this new publication that TiO is both a metal and, below 0.5 degrees Kelvin, transitions to a superconducting state, similar to Ti in its metal state; it is the only superconductor in a family of compounds that are otherwise insulators at low temperatures," explained Fengmiao Li, a Research Associate who works closely with Sawatzky and Zou and is first author on the paper. “

It has been difficult to develop a pure TiO crystalline sample for study; atomic titanium favors a bond with two oxygen atoms forming titanium dioxide (TiO2). "Materials with Ti 2+ remain extremely rare," said Zou. "By using the unique approaches developed by Fengmiao and others in this work, we are finally able to create high-quality and pure TiO with Ti at 2+ and reveal its intrinsic nature. To our surpise, TiO behaves as none of the other 3d transition metal monoxides."

Using a technique called molecular beam epitaxy, Li and colleagues were able to stabilize the compound and generate the cleanest TiO thin film to date. “This recipe for growth was established at CLS, where they have the capacity to do the kind of in situ spectroscopy necessary to examine the cultivated films, guiding crystal growth in order to produce clean samples for research,” said Li.

Now that the team has a recipe for the thin film, they can grow pure crystals in the lab at the University of British Columbia, and work to further understand the material and its potential applications. It is important to note, however, that the formula could not have been developed without collaboration and support from the Resonant Elastic and Inelastic X-ray Scattering (REIXS) staff at the CLS. The development of the REIXS beamline was driven by Sawatzky, who is also a beam team leader.

The REIXS beamline at CLS was funded by the Canada Foundation for Innovation and commissioned in 2010. It opened for general users in July 2011, and since then has been important asset for SBQMI researchers, and the collaborative connections SBQMI researchers have at CLS are essential for this study.

The Canadian Light Source at the University of Saskatchewan is a national research facility, producing the brightest light in Canada—millions of times brighter than even the sun. One of the largest science projects in our country’s history, the CLS hosts annually more than 1,000 scientists from around the world who use our light to conduct ground-breaking health, agricultural, environmental and advanced materials research.