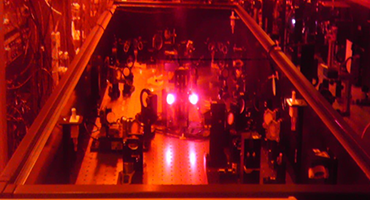 News Thumbnail Caption
The laser centrifuge used in the experiment.

Almost one hundred years ago, Enrico Fermi predicted a phenomenon he called "polarization drag” - a rotation of the polarization of light when it passes through a rotating dielectric material. Scientists first observed this phenomenon experimentally in 1976 by sending a laser beam through a rotating solid (glass). Recently, UBC Physics & Astronomy Associate Professor Valery Milner and his team observed this phenomenon in a gas consisted of fast-spinning molecules. This is the first time that polarization drag is seen experimentally in a gaseous medium. This work was published in August in Physics Review Letters and chosen as the Editor's Suggestion. It was also covered by American Physical Society (APS) Physics Synopsis and featured on the front page of the APS Physics website.

In their experiment, the team first brought the gas to ultrafast rotation using a laser tool known as the optical centrifuge. Then, they sent linearly polarized (probe) laser pulses through the gas of spinning molecules and analyzed the change in the probe polarization. The team was able to demonstrate polarization drag in various gases - oxygen, nitrogen, carbon dioxide, and ambient air – in the amount that agrees with the theoretical predictions. The team also showed that the effect is lasting beyond the centrifuge pulse, and that they can control it by changing the rotational frequency of the centrifuged molecules.

"In addition to the academic interest, our attempt at measuring an extremely small polarization drag in gasses forced us to develop a novel experimental technique, which opens new avenues in ultrafast laser control of quantum systems," Valery shared. "For instance, we plan to employ this sensitive technique to control, detect and study molecular chirality, as well as to investigate superfluidity at the nanoscale."

Results from this will have implications beyond the molecular level. "Polarization drag, studied in our work, is expected to play an important role in astrophysical studies, where it can cause additional rotation of the polarization of light emitted by rotating neutron stars," Valery added. "A proper account for the latter phenomenon may improve the estimation of the interstellar magnetic fields and the rotation direction in pulsars."

Polarization of probe light rotates as it passes through the gas of molecules, brought to ultrafast rotation by the pump field of an optical centrifuge.