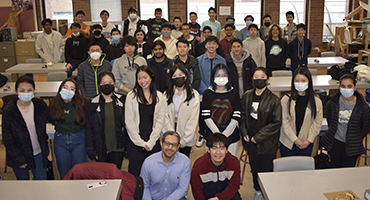 More than 600 high school students and teachers participated in the 2022 Virtual UBC Physics Olympics on March 5. Congratulations to Semiahmoo Secondary School for receiving the top overall team honour this year.

The UBC Physics Olympics is one of the oldest and largest high school physics competitions in North America. Due to Omicron, the annual event was held virtually again this year. While the event organizers - professors, students, and staff from UBC Department of Physics & Astronomy and Department of Curriculum & Pedagogy - learned many valuable lessons from hosting the event virtually last year, Omicron presented new challenges - the shift to hosting virtually last minute means there wasn't a lot of time for developing activities, and fewer student volunteers were available given many were still adapting to return-to-campus. "We were surprised and motivated by the overwhelming enthusiasm for the event," said UBC Physics & Astronomy Communications Coordinator Theresa Liao. "That's why we decided to go ahead with the event, instead of cancelling it."

Though the event was hosted on a virtual platform, the competition required students to collaborate and engage in hands-on experience off-screen. Students worked together to solve interesting physics and astronomy problems, and to build devices that will test their understanding of physics in the real world. They competed in four activities - Fermi Questions, an Exoplanet Transit Lab where students needed to answer questions about planets based on the light curves they were provided, Quizzics! and the Smartphone Elevator (prebuild project).

Perhaps the most unique one was the prebuild activity, which the organizers brought back this year despite the event being hosted online. The “Smartphone Elevator” activity challenged students to build a mechanical device to lower the phone from the table to the floor with the minimal acceleration, while doing it as fast as possible. The students used a freely available Phyphox smartphone app to measure this acceleration, as well as the time it took to lower the phone. "This was a great event, as it encouraged students to use the technology they already have to do science," said Professor Marina Milner-Bolotin from the Department of Curriculum and Pedagogy.

Teams got creative in building their devices, using components like levers, slides, pulleys, cranes, and even water towers where the phone floated on top, and was lowered slowly as the water was drained from the tower. One school even included their own music in honour of the event - even though musicality wasn't part of the judging rubric, the judges really enjoyed it.

At the end of a fierce day of competition, congratulations to Semiahmoo Secondary School who received the top overall prize, followed by Fleetwood Park Secondary and R.E. Mountain Secondary.

Louay El Halabi, the physics teacher from Semiahmoo Secondary School, shared with Marina, “Thank you so much!!! A great event as usual attended by a substantial number of teams. Thank you, Marina and all faculty who helped make this event a reality. Students need something like that to distract them from COVID routines.”

We would like to thank all the teachers, students, and volunteers who helped made this possible. We hope to see everyone again next year...in-person!