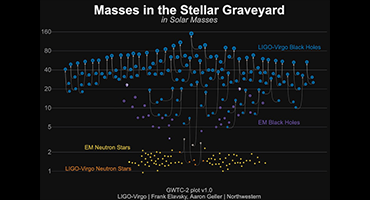 The results, published in four papers on arXiv, and soon to appear in Physical Review X and other journals, were collected from the first half of the most recent LIGO-Virgo observing run, O3. The two LIGO detectors in the U.S. and the Virgo detector in Italy gathered the data from April to October 2019.

Gravitational waves are tiny ripples in the fabric of spacetime that carry information about the movement of massive objects in the Universe, like black holes and neutron stars.

The results feature what may be the first gravitational-wave observation of a neutron star colliding with a black hole, black holes spinning faster than ever before measured, and black holes with spin that likely doesn’t align with their orbit.

“From these results, we’re starting to see hints that there may be a population of black holes that form orbiting pairs after stellar collapse,” said LIGO team member Jess McIver, an assistant professor in the department of physics and astronomy at UBC. “Now that we’re beginning to see the true picture of black hole populations with gravitational waves, clearly we still have a lot to learn about how stars live and die.”

McIver and her research lab are involved in leading the LIGO detector characterization effort, which distinguishes between true gravitational wave signals and the detector noise quirks that can mask or mimic them. Data recalibration, conducted in part by UBC research associate Evan Goetz, also reveals more distant gravitational wave sources.

“Data from LIGO and Virgo has to be processed and analyzed very carefully to confirm new and varied gravitational wave signals coming from many different astrophysical events,” said Goetz. “We calibrate the data and characterize noise sources, which requires us to understand all the strange ways noise can impact our analyses. Without this careful, patient understanding, we might otherwise miss these signals.”

The improved data quality and calibration allowed LIGO-Virgo researchers to conduct improved tests of Einstein’s theory of general relativity with the recovered gravitational wave signals – with all results so far consistent with Einstein’s predictions.

“That increase in detector reach translates to a huge improvement in the observed volume and rate of gravitational wave detections,” said McIver.

Data from the second half of the O3 observing run is still being analyzed. Gravitational wave discoveries reported from O3 have included a few surprises, including the first definitive measurement of an intermediate mass black hole – between stellar-mass black holes that form from collapsed stars and supermassive holes at the centers of galaxies. A ‘mystery compact object’ was also observed between the lowest mass scientists have measured for a black hole and the highest mass we would expect for a neutron star, an extremely dense core of a dead star. The second detection of gravitational waves from a binary neutron star merger, revealed a potentially new extra-galactic population of neutron stars orbiting each other.

The LIGO and Virgo detectors are currently undergoing upgrades to prepare for the next observing run, O4.

The results are reported in a series of four papers published on the arXiv: