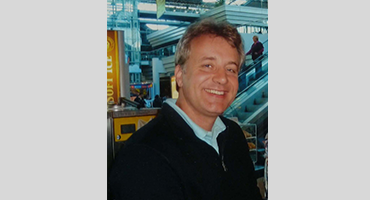 UBC Physics & Astronomy Professor Robert Raussendorf has been awarded the 2021 CAP-CRM Prize in Theoretical and Mathematical Physics by the Canadian Association of Physicists (CAP) and the Centre de recherches mathematiques (CRM). This award recognizes his “eminent contributions to the theory of quantum computing, including groundbreaking work on measurement-based or ‘one-way’ quantum computing, fault-tolerant quantum computing, and computationally universal quantum phases of matter.”

“I feel very honoured and delighted to receive the 2021 CAP-CRM prize in theoretical and mathematical physics,” said Robert. “I also view it as a recognition of the fact that quantum computation needs fundamental research.”

Robert has been a leader in the field of measurement-driven quantum computing for a long time; last year, his influential 2003 paper, Measurement-based quantum computation on cluster states, was recognized by the journal Physical Review A as one of the most influential papers of the past 50 years, one that altered the course of quantum computing research and development. This paper built on his ground-breaking 2001 paper with co-author Hans J. Briegel on what was then known as the One-way quantum computer.

This fall, the QCGC team, including Robert Raussendorf, Joe Salfi, Jeff Young, and Lukas Chrostowski, has been working to turn some 2020 and 2021 publications offering a theoretical framework for quantum computing into a roadmap toward an achievable, sustainable architecture. This work builds on major contributions from Robert to the field, including his work on the role of topological matter in quantum computing, as well as Jeff Young's vision for optically controlled silicon quantum chips.

The objective of this award is to recognize research excellence in the fields of theoretical and mathematical physics. The annual CAP-CRM Prize in Theoretical and Mathematical Physics was first introduced in 1995, on the occasion of the 60th anniversary of the CAP. A series of virtual plenary medal talks will be organized to honour the 2021 medal recipients. The talk schedule will be posted on the CAP's website and notification of each talk will be issued once arranged. The medal will be forwarded to Robert Raussendorf with the congratulations of the community.

ABOUT the Canadian Association of Physicists (CAP)

The Canadian Association of Physicists, founded in 1945, is a professional association representing over 1600 individual physicists and physics students in Canada, the U.S. and overseas, as well as a number of Corporate, Institutional, and Departmental Members. In addition to its learned activities, the CAP, through its charitable arm - the CAP Foundation, also undertakes a number of activities intended to encourage students to pursue a career in physics.

The Centre de recherches mathématiques (CRM), based in Montreal, is an internationally recognized institute for research in the mathematical sciences. The CRM has research groups in 13 areas that bring together hundreds of researchers. Every year, thousands of researchers from around the world visit the CRM to participate in its thematic programmes and other research, education, outreach, innovation and knowledge transfer activities.