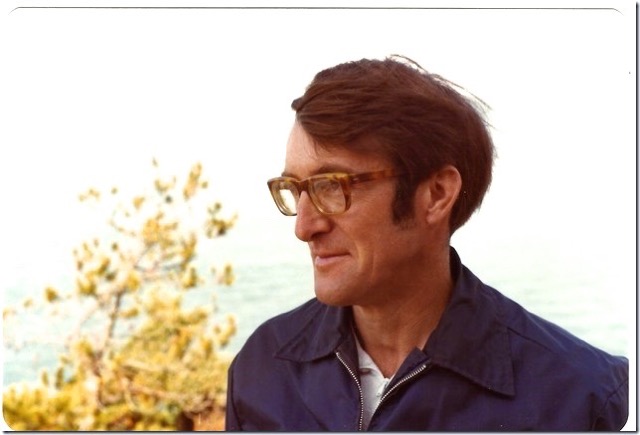 Peter was a Lincolnshire lad.  His very first memory was of pushing a ball between the rails of a third-floor flat in the city of Bath (to which his parents had temporarily moved), and watching it fall to the ground below and go bouncing down the road.  This was perhaps the first sign of an interest in physics, and in gravitation in particular.

Back in Washingborough at the beginning of World War II, Peter passed the dreaded eleven-plus exam and moved to Lincoln School.  From here, with a State Scholarship and some basic life-skills from the local Boy Scout troop, he moved to the Physics Department of Manchester University under Professor P.M.S. Blackett.  The six State Scholarship holders in the fifty-or-so members of the First Year class were told that they were to be in the Mathematical Physics option.  This meant that they had to take mathematics classes alongside the students specializing in that discipline; by the Third Year Peter was the only survivor.

Continuing into graduate school at Manchester, Peter found himself in a situation of academic freedom that now seems quite remarkable.  As was the case throughout the UK at that time, M.Sc. degrees were a rare commodity, and essentially all graduate students immediately entered the Ph.D. program.  Peter was initially interviewed by Professor Leon Rosenfeld and was assigned his research topic - "A very boring problem in nuclear physics (it concerned the shell model I think) ..."   And then, "I spent most of my time reading about other things - a good lecture course on quantum mechanics or quantum electrodynamics would have been very helpful."  There were no lecture courses.  He writes, "Occasionally one talked to Julius Podolanski, the department's only Lecturer and Rosenfeld's assistant.  The department was very small; there were two Assistant Lecturers ..."

After two years he found another problem (on slow neutron scattering), wrote his thesis and passed the oral exam.  Now he was faced with either doing two years of compulsory National Service (in the military) or working in a reserved occupation that would excuse him from that chore - remember that this was the time of continuing threat from the USSR.  Recruiters appeared on campus and he signed up with the Rolls Royce aero-engine division near Nottingham, working on the aerodynamics of air intakes to their jet engines.  "It was not boring," he remarks.

Having unsuccessfully applied for a Postdoctoral Fellowship from the National Research Council of Canada he was invited to London to be interviewed by Gordon Shrum, Head of the UBC Physics Department, who had checked the list of Post-doc applicants and was on his annual recruitment tour of the UK.  Offered a 1-year lectureship, Peter expressed interest, but was already in the process of applying for a temporary position in Accra, Ghana.  When that process dragged interminably on, Peter eventually wrote to Shrum - who offered him a job starting that September.  Peter's 'National Service' obligations would not end until November.  With an admirable burst of initiative he took his vacation time in August, visited the parents in Washingborough and learned to sail in Devon, wrote a letter of resignation and shipped out from Liverpool to Montreal.  It seems that the Press Gangs never caught up with him.

So in 1957 Peter began his 39-year career at UBC in Vancouver.  His early work was on the Einstein field equations and scalar theories of gravitation.  "For reasons not entirely clear, perhaps the influence of Newton's ghost floating over the fields of Lincolnshire ..." he concentrated on gravitation, producing "Several alternative theories and more than 20 papers between 1966 and 1979".  This work grew from the recognition that with trivial changes, the Newtonian theory can be used to give correct predictions for the 'standard tests' of relativity theory (redshift, light deflection and the perihelion shift).  "Almost everyone in the field believed that Einstein had discovered a complete and satisfying theory of gravity."  On the other hand, he felt it was reasonable to pursue other avenues; this culminated in his book 'Postprincipia Gravitation for Physicists and Astronomers - World Scientific, Singapore, 1991.'  In further pursuit of this idea he attempted to publish 'Long-Range Forces and Galactic Dynamics' in 1995 but was stymied by referee recalcitrance, and the work was only recorded as an Arxiv pre-print.  He was still following up on this in the year before his death and I believe that another recent Arxiv pre-print may exist dealing with his ideas about the existence (or not) of 'dark matter'.  Throughout, Peter maintained that Einstein has received too much adulation for his Relativity theory, and that Poincaré and others deserve a larger share of the credit.

Peter acknowledged that the 1974 discovery of a binary pulsar by Taylor and Hulse did give concrete support to the Einstein theory; the rate of change of its period is correctly predicted by gravitational radiation emission.  But this is a single result and he insisted that "we should [still] be asking [if] there are many theories that have the correct post-Newtonian limit and the right gravitational radiation."

Along with his main interest there was other "low-level mathematical stuff" like 'Quaternions in Relativity' and 'New Spinor Calculus'.   And in 1972 after teaching thermodynamics he wrote 'Classical Thermodynamics simplified' - a modification of the Caratheodory axiomatic approach.  In the 1980s he wrote some papers on the Bell inequalities.  In view of the experimental agreement with quantum mechanics he states that, "My own preference [in choosing to abandon either locality or reality] is to abandon reality.  He published 'New Forms of the Dirac Equation' in 1988, and 'The Schroedinger Equation in terms of Probability Densities' in 1994.

This is all 'heavy-stuff', but anyone who doubts that Peter had a lighter side should check Nature 286 438 (1980).  When he submitted this he received a polite note saying that they publish only technical letters, but then, to his surprise, they printed it.  Years later he discovered that the Editor at the time was John Maddox who had been one of those two Assistant Lecturers at Manchester - and his tutor as an undergraduate ...  In recent years Peter wrote a 2-volume self-published Utopia (Dystopia?) set as a novel which was the vehicle for mini-dissertations on a large number of topics that had been on his mind.  Not an easy read, frankly, but he was pleased with what he had done.

Physicists generally regard themselves as good problem solvers, but few of them manage to extend that skill so far outside the realm of Physics as Peter did.  He had an enduring interest in spelling reform.  His paper 'Whole Language and Phonetic Spelling' appeared in the education journal 'Reading Improvement' in 1993.  It describes his pronunciation guide, which is easy to type and to alphabetize.  Slightly modified it became the Rush system of spelling.  In a similar vein was his scheme for notating and teaching dancing steps; as this didn't work for his dancing partner the outcome was less satisfactory.

In the same analytical style Peter involved himself in the political field through correspondence with cabinet members of any or all of the major parties, federal and provincial.  He was particularly exercised about electoral reform, and came up with a number of ingenious schemes of his own.  All to no avail - as was the case, sadly, for his outspoken support for Assisted Suicide.  Within the Physics Department he generally avoided getting involved in bureaucratic matters, though his piquant comments could often be heard in the hallowed halls - always on the side of common-sense and reason.  For example, in the 1990s he was part of a proposal for drastic reform of the First Year Physics curriculum for students who were definitely not interested in pursuing careers in Physics, Geophysics or Engineering.  However, it was decreed that it must be possible for all Faculty of Science students to be able to enter a Second Year Physics Program, so that topics of greater interest to Life Science students (a huge majority) had to take second place.

Outside the Department Peter was great dancer (or so he told me), and a keen outdoors-man, hiking and skiing.  He and Myer Bloom jointly purchased a unit of the very first condominium complex built at Whistler, overlooking the west side of the highway immediately north of Creekside.  He continued hiking and skiing until his developing physical limitations eventually forced a halt.

Peter married Pang Yi, a talented artist.  Their daughter Julia kindly provided the information on which almost all of this biography is based.  With her and husband Jamie's help, and the devoted care of his long-time partner Diane Bruce, Peter fought a prolonged battle with his increasing disabilities, and retained his rational mind and sense of humour to the end.  His family and friends continue to miss his incisive remarks, his reliable critiques of current movies, and his remarkable knowledge of the local restaurant scene!