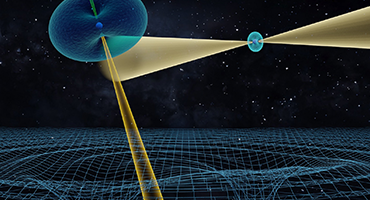 News Thumbnail Caption
Artistic impression of the Double Pulsar system, where two active pulsars orbit each other in just 147 min. The orbital motion of these extremely dense neutrons star causes a number of relativistic effects, including the creation of ripples in spacetime known as gravitational waves. The gravitational waves carry away energy from the systems which shrinks by about 7mm per days as a result. The corresponding measurement agrees with the prediction of general relativity within 0.013%. © Michael Kramer/MPIfR

Astronomers from 10 countries have measured predicted relativity results for the first time after observing twin pulsars for 16 years.

Pulsars are incredibly dense objects which produce radio beams that sweep the sky like a lighthouse. They are an unrivalled laboratory to test gravity theories in the presence of very strong gravitational fields, says lead author Dr. Michael Kramer, director of the Max Planck Institute for Radio Astronomy. “We have reached a level of precision that is unprecedented.” He said the team was able to see effects that could not be studied before, thanks to this level of precision.

One such effect was the delay, and deflection of light due to the curvature of spacetime, according to co-author Dr. Ingrid Stairs, professor in the UBC department of physics and astronomy. The researchers follow the propagation of radio photons emitted from one pulsar and track their motion in the strong gravitational field of a companion pulsar, she says. “We see for the first time how the light is not only delayed due to a strong curvature of spacetime around the companion, but also that the light is deflected by a small angle of 0.04 degrees that we can detect. Never before has such an experiment been conducted at such a high spacetime curvature.”

This cosmic laboratory was discovered by members of the team in 2003 and consists of two radio pulsars which orbit each other in just 147 min with velocities of about 1 million km/h. Astronomers think the twins were born when one pulsar, ‘A’, was likely ‘dead’ for a few million years before being ‘spun’ back to life and fed matter by the parent of the second pulsar, ‘B’, which then exploded, leaving the two stars observed today.

Other relativity effects measured for the first time included the additional change in orbit of the entire pulsar system due to the loss of mass of one of the stars, said co-author Dr. Dick Manchester, a Commonwealth Scientific and Industrial Research Organisation (CSIRO) Astronomy and Space Science fellow. The team had needed to take Einstein's famous equation E = mc2 into account when considering the effect of the electromagnetic radiation emitted by the fast-spinning pulsar on the orbital motion, he said. “This radiation corresponds to a mass loss of eight million tonnes per second! While this seems a lot, it is only a tiny fraction - three parts in a thousand billion billion - of the mass of the pulsar per second.”

The researchers also measured - with a precision of one part in a million -  that the orbit changes its orientation, a relativistic effect also well-known from the orbit of Mercury, but here 140,000 times stronger. They realized that at this level of precision they also needed to consider the impact of the pulsar’s rotation on the surrounding spacetime, which is “dragged along” with the spinning pulsar. “In our experiment, this ‘frame-dragging’ means that we need to consider the internal structure of a pulsar as a neutron star. Hence, our measurements allow us for the first time to use the precision tracking of the rotations of the neutron star, a technique that we call pulsar timing, to provide constraints on the extension of a neutron star,” said co-author Dr Norbert Wex, Max Planck Institute for Radio Astronomy Fundamental Physics in Radio Astronomy.

Co-author Steffani Grondin took part in the research as an undergraduate student in UBC’s department of physics and astronomy and is now a graduate student at University of Toronto. She said while this was a long experiment, it allowed the team to precisely test gravity like never before. “With ongoing observations, even more relativistic effects may become visible in the future.”

PSR J0737-3039 A/B: Animation of the Double Pulsar system PSR J0737-3039 A/B and its viewing orientation from Earth. The system - consisting of two active radios pulsars - is seen “edge-on” from Earth, i.e. the tilt of the orbital plane relative to our line-of-sight is only about 0.6 deg. Copyright: Michael Kramer/MPIfR.

Shapiro Delay: Animation of the Shapiro delay measurement in the Double Pulsar. When fast spinning pulsar orbits around the common centre of mass, the emitted photons travel through the curved space time of the caption pulsar and, hence, get delayed. Copyright: Michael Kramer/MPIfR.