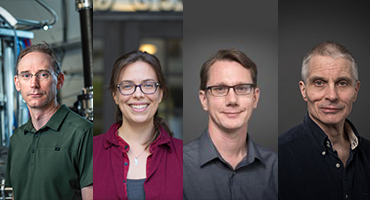 UBC Physics & Astronomy researchers David Jones, Jess McIver, Joerg Rottler, and Jeff Young have been awarded the federal New Frontiers in Research Fund (NFRF) 2020 Exploration Stream. This funding, each at the amount of $250K, will support high-risk, high-reward and interdisciplinary research. Their three projects are among the 7 projects awarded at UBC, and 117 projects awarded across Canada. Their projects will have potentially game-changing impacts in mining, machine learning, and event detection in astrophysics.

“Research that takes great risks advances the way we think about the issues that impact Canadians," said the Honourable François-Philippe Champagne, Minister of Innovation, Science and Industry. "The Government of Canada is supporting researchers who are exploring bold new directions that could change lives and position Canada at the forefront of global research and innovation.”

Here are the three projects led by PHAS researchers:

This project will attempt to use a precision measurement technique known as frequency comb spectroscopy in mining context to perform realtime evaluation of mining ore. The ultimate goal is to design, build and demonstrate a noncontact measurement method for rapid classification of ore with no sample preparation. If successful, this novel sensing technology could support standard process operation control and optimization for on-site analysis, and potentially be employed directly as an ore sorting sensor in an active mining and processing environment. It would increase sorting accuracy, reduce the amount of material that must be processed, and decrease the environmental footprint, while having a significant impact on mine economics.

In a game-changing 2017 discovery, gravitational waves (GWs) were observed in concert with light for the first time. A burst of gamma-rays was observed within seconds of a GW signal from the merger of two neutron stars, but the glow of the resulting "kilonovae" explosion was not detected until nine hours later. The project will employ a novel machine learning (ML) approach to leverage information reported by LIGO-Virgo to identify kilonovae events. Understanding the complete evolution of kilonovae will unlock new insights into some of the most important outstanding questions about our Universe, including the structure of extremely dense matter and the origin of heavy elements like gold. In addition to advancing AI methods, we will enable Canadian telescope assets located around the world to swiftly slew toward a true astrophysical GW signal, reject noise events, and unlock the potential for new cosmic discoveries led by Canadian astronomers.

The two four km long Advanced LIGO interferometers in the U.S., the most sensitive gravitational wave detectors in the world, have registered the signals of more than 50 black hole and neutron star mergers. The next generation of detectors will require a significant improvement in mechanical loss in the most sensitive (10-1000 Hz) frequency range. This project establishes a “materials-by-design” framework that optimally synergizes thin film fabrication with atomistic simulations identifying the operative mechanisms of internal friction, and predicting mechanical loss that will be measured in a novel optical cryostat built at the Stewart Blusson Quantum Matter Institute. The novel highly reflective materials created will open the door to ground-breaking discoveries such as tests of general relativity in extreme spacetime curvature, a census of all stellar-mass black holes in the visible Universe, and a resolution of conflicting measurements of the expansion of the Universe.

The fund’s Exploration stream specifically targets interdisciplinary, high-risk, high-reward research that defies current models, bridges disciplines in novel ways, or tackles fundamental problems from new perspectives. The stream’s design recognizes that interdisciplinary research is often risky, but worthwhile given the potential for significant groundbreaking impact. All funded teams must demonstrate commitment to equity, diversity and inclusion in the research environment.