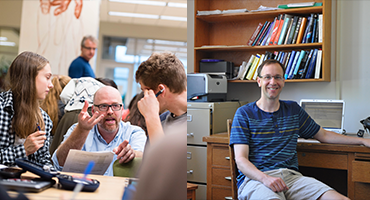 Congratulations to PHAS Professors Drs. James Charbonneau and Mark Van Raamsdonk, who are awarded the 2020/2021 UBC Killam Teaching Prize! The annual award recognizes faculty who demonstrate excellence in teaching. Nominations are made by students, colleagues, and alumni.

James joined the department as a graduate student in 2004. In 2011, he became a sessional lecturer for the department, and is now an assistant professor of teaching. This is not James first teaching award - he received the Killam Teaching Award for Science Instructors in 2016. He is also one of the developers of ComPAIR, an open-source peer feedback software. "We focus on making back-of-the envelope calculations of complex problems," James said about PHYS 333 (Energy and Climate, for science majors and non-majors), one of the courses that he taught in the past year, and also where ComPAIR came from. "It's designed as a fully asynchronous distance education course, long before the pandemic hit, so it's a very different type of teaching." James also taught PHYS 101 (Energy and Waves, for life sciences) in the summer, and physics and computer science in the Science One program (an integrated first year science program).

“It's a real honour to be recognized for something I care so deeply about, particularly in this challenging year,” said James. Here is James talking about what online learning was going to look like in September in a video made during summer 2020.

Like James, Mark also has deep roots in the department. He completed his undergraduate degree (combined math/physics) at UBC in 1995, and returned to join the department as a faculty member in 2002. Known for his engaging lecture style and love for music (the organizer for the department's annual concert and a saxophone player), he taught PHYS 157 (Thermodynamics and Waves, for first year engineering students) and PHYS 341 (The Physics of Music, for non-science students) during 2020/2021. "The Physics of Music [course] has been great, since it combines two of my main interests and challenges me to find the intersection between these and present it in a way that is accessible to students without a science background." In fact, because the content is so accessible, Mark put together a parallel YouTube video series on his YouTube channel. This is the second time Mark receives a Killam Teaching Prize; the last time was in 2011/2012.

When asked about the challenge of teaching in the past year, both pointed to the difficulty in keeping the courses engaging and interactive online. James likes to do a lot of demos and have interactive class discussions. "The challenge was recreating that energy and enthusiasm in a online environment," he said. Mark shared a similar sentiment. “For Physics 157, it's been a really interesting challenge to teach and coordinate a huge first year course online while trying to keep it interactive and engaging,” said Mark. On a more personal note, Mark would like to recognize the contribution of the late Don Witt, a PHAS instructor who passed away in 2019. “Don coordinated Physics 157 before me and provided the foundation on which the current version of the course was built…[and] played an invaluable role in helping me take over the course in 2018."

“I am very honoured to receive this award. It is my privilege to be able to contribute to the education of so many bright students who will be part of the next generation of scientists, engineers and educators.”

Congratulations again to both! 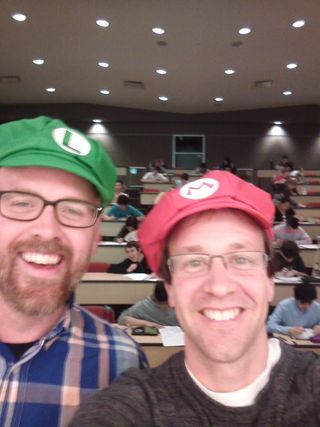