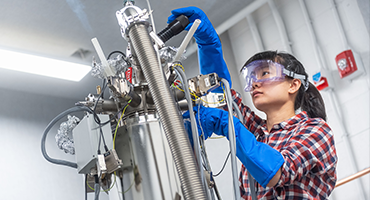 Amy Qu is almost finished her PhD. She will defend her thesis to the Department of Physics and Astronomy this month, and will start a new industry role in Germany in May. Her new job is in a highly specialised role at Scienta Omicron; as she begins her career, Qu looks forward to working full-time in the area of science she has enjoyed the most: making things work, and figuring out how stuff works.

“A lot of the larger instruments we have in the lab are custom-built; we tell the company what we need, and the company will build it to spec,” said Qu. “My job will be to test and ensure that the equipment meets the laboratory specs before it goes out to the customer.”

Scienta Omicron is a German manufacturer of microscopy and spectroscopy equipment. The company has worked closely with the Stewart Blusson Quantum Matter Institute (SBQMI) to develop custom equipment to specific user needs; each STM or ARPES instrument is engineered for each individual lab.

“I have always really enjoyed building things, and the hands-on aspects of research have been my favourite part of working in the lab,” said Qu, who is co-supervised by Sarah Burke and Andrea Damascelli, which has allowed her to feel equally at home with angle-resolved photoemission spectroscopy (ARPES) and scanning tunneling microscopy (STM) devices. “I’m going to an industry position, but it’s a very academic side of industry, so I am looking forward to continuing to learn and contribute to the field.”

Qu has worked closely with Burke and Damascelli, and has been involved with both with ARPES and STM devices, including the testing of an STM instrument in the Laboratory for Atomic Imaging Research (LAIR). When she began her Master’s degree in 2015, she was working primarily with ARPES, focusing on graphene.

While working with Damascelli, she realized there were some open questions that could be answered by doing STM; as a result, she has divided her time between both instruments, gaining a unique perspective on what is possible in fundamental materials research.

The work is exciting, particularly as it is new: what Qu and colleagues are working on is the realization of a theory that has been around for a while.

“It’s hard to do – other people have done it in other ways, but we’re the first to do this with atoms on top of graphene,” said Qu.

Qu credits SBQMI’s supportive environment for students, and the default toward collaboration, for her success.

“One of the most satisfying projects that I participated in was a collaboration between Burke, Damascelli, Doug Bonn, and Marcel Franz and their teams,” said Qu. “There were some interesting features that were revealed in an ARPES measurement, and we thought it had something to do with strain in graphene – when strained, the electrons behave as if they are in a magnetic field. It was clear that something was happening, but no one on the team was sure how to explain it.”

“When we first moved into the Brimacombe building and started sharing offices in 2015, we were discussing the issue, and Étienne (Lantagne-Hurtubise), who works with Marcel, was sitting right behind me," said Qu. "He happened to have read something about the issue recently, and since he thought it was interesting he ended up doing some calculations for us. It was just so amazing to have this dynamic, collaborative environment where theorist and experimentalists work, literally, side by side.”

The team’s work culminated in a publication in Scientific Advances (with first author Pascal Nigge, a Damascelli lab alum) in 2019.

“I have always appreciated how much interaction there is between groups at SBQMI – teams here are happy to share equipment and expertise, there's a ton of collaborative projects, many students are co-supervised,” said Qu, who was a participant in the QuEST program, having completed it in 2020. “The way that SBQMI prioritizes learning and discovery means that you get what you need, whether that is funding for equipment, or support to learn new skills, or connections with other students or faculty.”

For Qu, this has meant the ability to pursue research questions from all angles, learning important skills and approaches along the way. As she heads into her new role, this robust education will serve her well: she looks forward to working with engineers and continuing to enjoy hands-on work with complex scientific equipment.

“I have always noticed that many faculty researchers seem happiest when they are in the lab, using the equipment, and I am excited to dive into work that truly, for me, is all the best parts of what I have been able to do at SBQMI,” said Qu.