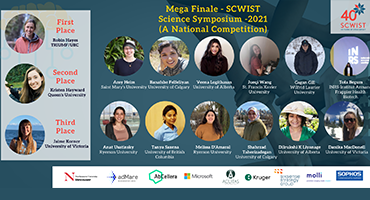 Congratulations to PHAS graduate student Robin Hayes, who received first-place prize in the SCWIST Science Symposium for her presentation, "Measurements of Higgs Boson Cross-Sections at the Large Hadron Collider." She will also receive a cash prize of $1500 for her outstanding work.

The SCWIST Science Symposium was open to young female scientists from across Canada. Eighty-eight students from 38 universities across nine provinces applied. After a competitive elimination round, the number was brought down to the 15 finalists who, one by one, presented their work throughout the summer. The result was announced during the finale on September 29, after a keynote speech from the honourable Dr. Hedy Fry.

Robin's research is on making precise measurements of how often a Higgs boson is produced at the Large Hadron Collider; this can tell us things like how strongly it couples to other particles, and provides a check on the governing theory of physics known as the Standard Model. Robin shared her thoughts about the Symposium with SCWIST in an interview.

“I always find that presenting my research, either in a written form or orally, causes me to think more deeply about the work I’ve been doing. The questions from the judges also prompted me to consider various aspects of my research that are otherwise easy to take for granted. Both of these aspects of the Symposium were really valuable.”

You can watch the finale event below.