PHAS alumnus Tom Davis on journey from physics to finance 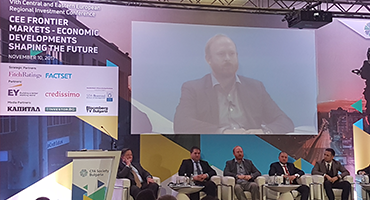 Dr .Tom Davis is the Director of Fixed Income and Derivatives research at FactSet Research Systems, a company that provides financial data and analytical tools for investment professionals around the globe. Tom received an undergraduate honours degree in Physics with a minor in Mathematics from the University of Guelph, and completed his PhD with UBC Physics & Astronomy in 2006 with a focus on theoretical condensed matter physics. Here, Tom shares his journey from research in physics to the finance world.

Why did you choose to go into physics for your undergraduate and graduate studies?

For most of my undergraduate and graduate career, I was pretty certain that I wanted to keep on the academic path and become a professor of physics. Of course, life doesn't always turn out the way you expect it to, and not everyone can be a professor of physics. Think of the following back of the envelope calculation: every professor has on average 20-25 PhD students over their lifetime. Each professor only retires once. Including an effect for the creation of faculty positions, this means there is roughly a ratio of 20:1 for PhD graduates to faculty positions, so most PhD's in physics are not faculty. Conversely, though, this means there are a lot of physics PhD's in industry somewhere!

What is your current job, and what does the work look like?

My job title is "Director of Fixed Income and Derivatives research," which means I lead a group of quantitative analysts in pricing of fixed income securities and financial derivatives. My time is generally split doing three different areas: mathematical research, software development and administration/managing. I like to make the analogy between a typical research project at FactSet and a master's project. The project begins with a relatively well-defined, but open-ended goal -- for example "FactSet would like to offer analytics on callable range accrual swaps to our clients." Initially, my job would be to research the relevant academic literature on this type of trade to determine the stochastic model, as well as determine the generally accepted pricing methodology -- at FactSet we implement "industry standard" models. Once this research is done and I understand how to price this security, I move on to the implementation. This stage is comprised of designing, prototyping and implementation of the function.

How did you find out about your first job? How did you market yourself to your employer?

I've known about the area of quantitative finance for quite some time. My office mate during graduate school took a course in the faculty of mathematics on Stochastic Calculus with Applications in Quantitative Finance and we would often have discussions regarding finance. Also, I met up with an acquaintance of mine (another former PhD student from UBC) at a career fair where he was representing FINCAD, a Vancouver based financial software company. When he left the company to pursue a career in London, England, a vacancy at FINCAD opened up and I successfully applied for the position.

In my interview, I tried to present myself as a person with a love of learning, who wishes to continue to learn throughout their career, as a person with strong analytical skills, and most importantly as a person who can quickly acquire new skills in order to solve the problem at hand.

How difficult was your transition from your degree program to the "real world?"

It was probably more difficult than I had anticipated, but I think that had little to do with the new routine (or the fact that I could no longer take a random Fridays off) and more to do with the "sudden" change of my goals in life. Perhaps the transition would have been easier had I not been single-mindedly focused on academia while in school and continuously re-evaluated my ambitions and goals.

How has physics and the experience in your graduate degree program helped you in your career? 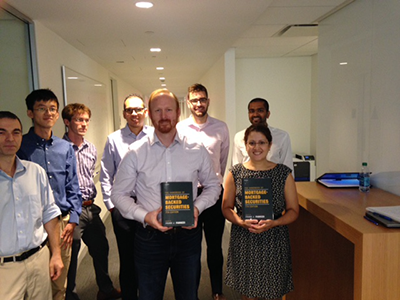 Mathematics cannot be an impediment for anyone pursuing a career in quantitative finance. Furthermore, having an intuitive feeling for mathematics (which is cultivated while studying physics) has benefits in finance. For instance, once you make the connection that the "duration" of a bond is really just the derivative with respect to the interest rate, then you can immediately calculate it with tricks from stat mech, as well as have an intuitive feeling on how it should change in a lot of circumstances.

Also, here at FactSet, the culture that has evolved has a distinct feeling of grad school as the quantitative research group is made up of seventeen people, seven of whom hold PhD's in physics (in theoretical condensed matter, experimental particle, theoretical high energy, string theory and general relativity) and the other five hold master's degrees in mathematics or financial mathematics. We hold regular group meetings where, each week, one of us will present on a topic of interest, such as interest rate models, some aspect of stochastic calculus, a software design pattern or a good paper that we've read recently.

What do you think is the most underrated skill or experience people get from doing a physics degree?

Strong analytical skills and highly developed problem solving skills are highly sought after in the job market. I have heard many times, both in social situations and in interviews, that physicists think they only have a very, very specific skill (such as modeling the low-temperature electron behaviour in quasi two-dimensional solids). While you might be an expert on that narrow topic, the skills that you learn have a much broader application.

Physics is a way of looking at the world -- one which tries to decompose big, intractable problems into smaller tractable ones. I used to say that there were three steps to doing theoretical physics 1) state the problem, 2) formulate it mathematically and 3) solve the equations. The more you progress in physics, the more you are dealing with the first one or two of these steps. However, the hardest step is actually using "physical intuition" to determine which physical processes will lead to the desired result.

What advice would you give to current physics students?

If there's one piece of advice I'd like to impart, it is that physicists have a very large set of skills that are applicable across a very wide variety of disciplines. If you find yourself interviewing for a non-academic job, don't sell yourself short! Even though most of the time in physics is spent solving equations, what we really have learned is how to address any problem in a quantitative way (insofar as the problem can be dealt with analytically). Getting this information across in an interview is crucial.

Perhaps the only other thing I would mention here is that I wish I had learned more about leading edge software practices and familiarized myself with different software tools. Learning a new language or developing skills with a new set of tools will inevitably increase productivity. If you know Maple, learn Mathematica or MATLAB. If you know C, try writing some code in C++. Different languages and tools have different strengths. As a result, that key insight may strike just because you've been forced to look at your problem in a new way.