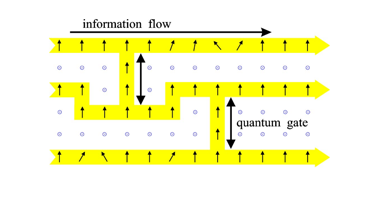 (via SBQMI) To celebrate 50 years in print, the journal Physical Review A has compiled a list of ­its 26 most influential papers of the past half-century. Among these is UBC Physics & Astronomy researcher Robert Raussendorf and Hans Briegel’s milestone 2003 paper, "Measurement-based quantum computation on cluster states," a publication that challenged perceptions of measurement and entanglement in quantum physics and altered the course of quantum computing research and development.

Raussendorf’s contribution was critical in terms of its influence on applications.

“But more importantly, it gives us a number of conceptual puzzles," said Raussendorf, Associate Professor in UBC's Department of Physics & Astronomy. "The field of quantum computation needs conceptual struggles in order to mature.”

A one-way quantum computer uses the principle of entanglement to prepare a resource state (in Raussendorf and Briegel’s original work, an object known as a cluster state). These states have inherent computational power, and a sequential measurement of the probabilistic values of each qubit generates universal computations to solve problems. Information is processed as earlier measurements inform later measurements. The correlations that arise in this sequence, also enforced by the entanglement of the original resource, drive the computation; it’s called one-way computation because the cluster state is destroyed by this measurement.

Raussendorf’s paper, authored during his PhD studies at Ludwig Maximilians University in Germany jointly with Hans Briegel, altered the course of quantum computing research, providing new theoretical avenues and inspiring a generation of researchers to build on his work. The original paper, "A One-Way Quantum Computer (Physical Review Letters, 2001," has to date been cited more than 2400 times. The 2003 paper celebrated in the Physical Review A anniversary edition provides a detailed description of this computational scheme, and has been cited 800 times.