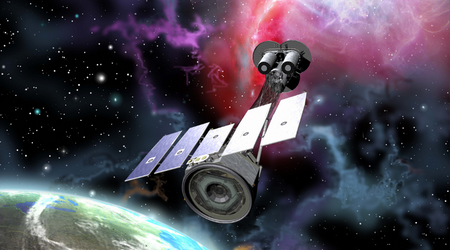 A version of this press release was shared via Washington University in St. Louis for the paper "Polarized x-rays from a magnetar", published on November 3, 2022 in Science (online). PHAS faculty, Dr. Jeremy Heyl, contributed as one of the lead authors for this paper. A link to the research paper "Polarized x-rays from a magnetar" can be found at the end of this article.

A signature in the X-ray light emitted by a highly magnetised neutron star known as a magnetar suggests the star has a solid surface with no atmosphere, according to a new study by an international collaboration co-led by UCL researchers.

The study, published in the journal Science, uses data from a NASA satellite, the Imaging X-ray Polarimetry Explorer (IXPE), which was launched last December. The satellite, a collaboration between NASA and the Italian Space Agency, provides a new way of looking at X-ray light in space by measuring its polarisation – the direction of the light waves’ wiggle.

The team looked at IXPE’s observation of magnetar 4U 0142+61, located in the Cassiopeia constellation, about 13,000 light years away from Earth. This was the first time polarised X-ray light from a magnetar had been observed.

Magnetars are neutron stars – very dense remnant cores of massive stars that have exploded as supernovae at the ends of their lives. Unlike other neutron stars, they have an immense magnetic field – the most powerful in the universe. They emit bright X-rays and show erratic periods of activity, with the emission of bursts and flares which can release in just one second an amount of energy millions of times larger than our Sun emits in one year. They are believed to be powered by their ultra-powerful magnetic fields, 100 to 1,000 times stronger than standard neutron stars.

The research team found a much lower proportion of polarised light than would be expected if the X-rays passed through an atmosphere. (Polarised light is light where the wiggle is all in the same direction – that is, the electric fields vibrate only in one way. An atmosphere acts as a filter, selecting only one polarisation state of the light.)

The team also found that the angle of polarisation – the wiggle – flipped by exactly 90 degrees, following what theoretical models would predict if the star had a solid crust surrounded by an external magnetosphere filled with electric currents.

Co-lead author Professor Silvia Zane (UCL Mullard Space Science Laboratory), a member of the IXPE science team, said: “This was completely unexpected. I was convinced there would be an atmosphere. The star’s gas has reached a tipping point and become solid in a similar way that water might turn to ice. This is a result of the star’s incredibly strong magnetic field. “But, like with water, temperature is also a factor – a hotter gas will require a stronger magnetic field to become solid.”

“A next step is to observe hotter neutron stars with a similar magnetic field, to investigate how the interplay between temperature and magnetic field affects the properties of the star’s surface.”

Lead author Dr Roberto Taverna, from the University of Padova, said: “The most exciting feature we could observe is the change in polarisation direction with energy, with the polarisation angle swinging by exactly 90 degrees.”

“This is in agreement with what theoretical models predict and confirms that magnetars are indeed endowed with ultra-strong magnetic fields.” Quantum theory predicts that light propagating in a strongly magnetised environment is polarised in two directions, parallel and perpendicular to the magnetic field. The amount and direction of the observed polarisation bear the imprint of the magnetic field structure and of the physical state of matter in the vicinity of the neutron star, providing information inaccessible otherwise.

At high energies, photons (particles of light) polarised perpendicularly to the magnetic field are expected to dominate, resulting in the observed 90-degree polarisation swing.

Professor Roberto Turolla, from the University of Padova, said: “The polarisation at low energies is telling us that the magnetic field is likely so strong to turn the atmosphere around the star into a solid or a liquid, a phenomenon known as magnetic condensation.”

Professor Jeremy Heyl of UBC Vancouver added: “It is also worth noting that including quantum electrodynamics effects, as we did in our theoretical modelling, gives results compatible with the IXPE observation. Nevertheless, we are also investigating alternative models to explain the IXPE data, for which proper numerical simulations are still lacking.”