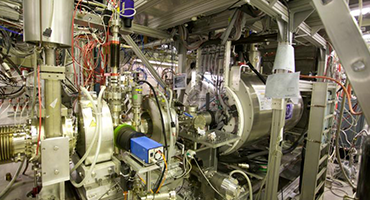 (From UBC Science) A quantum theory based on experiments that shook up the world of conventional physics 70 years ago has just passed a major test—this time in antimatter.

In 1947, physicists led by Willis Lamb observed an incredibly small shift in the energy levels of the hydrogen atom as the atom’s electron and proton interacted with vacuum.

Under traditional physics theories of the day, the so-called Lamb shift shouldn’t have occurred. The ‘nothing’ of vacuum shouldn’t influence the atomic behavior of hydrogen. The discovery spurred the development of a new quantum electrodynamics theory to explain the discrepancy, and won Lamb the Nobel Prize in Physics in 1955.

"Within the precision of our experiment, the Lamb shift of anti-hydrogen is identical to that of a regular hydrogen atom," said University of British Columbia chemist Takamasa Momose, a principle author of the findings reported this week in Nature and an associate member of the Department of Physics & Astronomy. "The work confirms that a key portion of quantum electrodynamics theory holds up in both matter and antimatter. It takes us a step closer to understanding the differences between matter and antimatter, and why so much antimatter vanished after the Big Bang."

A Lamb shift is a direct experimental manifestation that vacuum isn’t made of ‘nothing’ but dynamically fluctuates with virtual particles that are continually born and destroyed. In the case of hydrogen, these vacuum fluctuations push the electron slightly away from the proton.

"The effect is very small in terms of the energy involved, but the discovery of the Lamb shift has played a significant role in helping us understand the origin of our Universe," says Momose, whose team explores the physics and chemistry of extremely cold molecules.

Antimatter, annihilated on impact with matter, is notoriously tricky to capture and work with. But its study is key to solving one of the great mysteries of the universe: why anti-matter, which should have existed in equal amounts to matter at the time of the Big Bang, has all but disappeared.

"The observation of the Lamb shift in hydrogen was a landmark event in the history of modern physics," said Makoto Fujiwara, a PHAS alumnus, co-principle author and a physicist with TRIUMF - Canada's particle accelerator centre. "I think every physicist who has worked in an antimatter experiment has dreamt of measuring this effect in antihydrogen. We’re thrilled that we’ve finally been able to do just that, thanks to new advanced laser technology."

Momose and colleagues conducted the experiment using the ALPHA apparatus at CERN. Creating, and then trapping and probing anti-hydrogen atoms is a painstaking process. Anti-atoms have to be electromagnetically bound together, then magnetically trapped in a vacuum. The researchers then used specialized laser technology developed by Momose at UBC to measure the Lamb shift in the antimatter.

Other PHAS members who are part of the Nature publication reporting on the experiment include: Dr. Walter Hardy (PHAS Professor Emeritus), Nathan Evetts (PHAS grad student), Alex Khramov (former UBC/TRIUMF PostDoc), and Mario Michan (former PHAS grad student). The 121nm laser design was based on the Mario Michan’s PhD work at UBC PHAS under Takamasa Momose's supervision. Alex Khramov and Takamasa Momose operated the laser during the experiments. Walter Hardy and Nathan Evetts were in charge of the microwave operation for this measurement.

ALPHA is an international antimatter research collaboration based at CERN, comprised of 50 scientists from eight countries. The Canadian ALPHA team consists of scientists and students from the University of British Columbia (UBC), TRIUMF, Simon Fraser University, the University of Calgary, and York University. The Lyman-alpha laser team is led by Takamasa Momose (UBC), and consists of scientists, students, postdocs from UBC, TRIUMF and Calgary. ALPHA-Canada research is funded in part by NSERC, NRC/TRIUMF and the CFI.

At the European Organization for Nuclear Research, physicists and engineers are probing the fundamental structure of the universe. They use the world's largest and most complex scientific instruments to study the basic constituents of matter – the fundamental particles. The particles are made to collide together at close to the speed of light. The process gives the physicists clues about how the particles interact, and provides insights into the fundamental laws of nature.