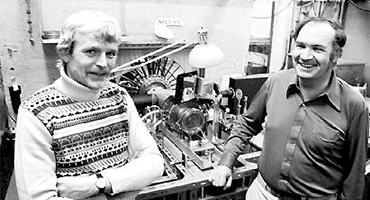 It is with great sadness we announce the passing of Professor Emeritus Dr. Johannes ("Hannes") Barnard on Saturday, February 5th, 2022.

Hannes was born in 1929 in Walvis Bay in Namibia, Africa. He completed his undergraduate and master's degree at the Rhodes University, South Africa, and received his PhD degree with a research focus on spectroscopy from the University of Glasgow, Scotland.

Hannes joined the department in 1959, recruited by the then Department Head Gordon Shrum, to be the first member of the Plasma Physics group during a rapid expansion of the department. This is the time when renown physicists like Heisenberg predicted that fusion energy would flow within the next decade. Shrum asked Hannes, whose expertise in spectroscopy could help with measuring the high temperatures of fusion plasma, to start the group on a moderate budget. The group continued to grow, at some point included 15 graduate students and several postdoctoral fellows, until fusion enthusiasm waned in the seventies.

Hannes retired in 1994 after 35 years of service to the university. He will be sorely missed by his colleagues.

A celebration of life is being considered at the moment; we will update this page with additional information when it becomes available. At UBC, the BC, Musqueam and UBC flags (at the North Plaza of the Life Building) will be lowered on Monday, February 28th, in remembrance of Hannes.