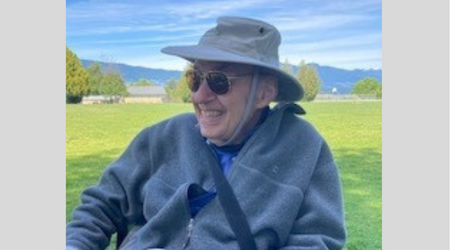 It is with great sorrow that we mark the passing of Physicist and Educator, Professor Emeritus Dr. Irving Ozier, on August 27, 2022.

Irving was born in September, 1938 in Montreal, Quebec to parents Harry and Peppi (Schwartzwald) Ozier. He completed his Bachelor degree from the University of Toronto, followed by a PhD from Harvard University under Professor Norman Ramsey (Nobel Laureate in Physics, 1989) in 1966.

He started his career with research fellowships at Harvard and MIT, followed by a research position at the Rockwell International Science Centre in Thousand Oaks, California. In 1970, he was hired as Associate Professor at the Department of Physics & Astronomy at UBC (1970-77), receiving full Professorship at PHAS in 1977.

Irving enjoyed many fruitful collaborations throughout his career in the UBC Physics and Chemistry departments, as well as many partnerships with researchers further afield. He collaborated with Dr. Nasser Moazzen-Ahmadi of the Department of Physics and Astronomy at the University of Calgary, focusing on the study of infrared (IR) spectra (1995-8). While a Visiting Professor in Eidgenossische Technische Hochschule, Zurich, Switzerland (1988 - 1989), he worked with Dr. Alfred Bauder, and subsequently as a visiting Research Fellow at University of Nijmegen, The Netherlands (1976-1977/1997), he collaborated with Dr. W. Leo Meerts. In this latter collaboration, Irving had the idea to observe so called Avoided Crossings in a molecular beam electric resonance experiment to observe forbidden transitions. Since the experimental equipment was available in Nijmegen, from 1977 over a period of more than 20 years, Irving spent 6 weeks a year in Nijmegen carrying out the experiment, then analyzing the results with Dr. Meets in his follow-up visits to Vancouver. The Avoided Crossing technique eventually got a chapter in the latest version of the famous textbook by Gordy and Cook: W. Gordy, R. L. Cook (1984). Techniques of Chemistry, Microwave Molecular Spectra. Wiley-Interscience; Volume 18 edition.

Irving received a number of awards throughout his career, including the Alfred P. Sloan Research Fellow (1972-1974), the Izaak Walton Kiliam Memorial Senior Fellow at UBC (1982-1983), and Visiting Research Officer for the National Research Council of Canada from 1982 – 1983.

Irving’s life was commemorated at the Temple Sholom Cemetery in White Rock/South Surrey, B.C. on Sunday, September 11, 2022. He is survived by spouse Joyce (Weinstein), and children Elizabeth, David, and Douglas.

We thank Don Fleming, Douglas Ozier, Jim Carolan and Leo Meerts for their help in preparing this announcement.