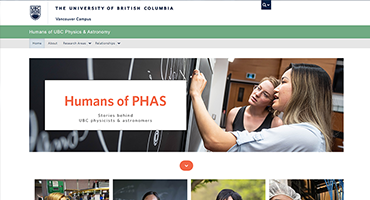 The Department of Physics & Astronomy is launching Humans of PHAS, a project inspired by the Humans of New York. We will be sharing stories of the people who have been part of the department – professors, staff, students, and alumni – and explore where they came from and where they are going in the future. These stories will be featured on the Humans of PHAS website, through physical posters in department buildings, and through social media channels. Visitors can also scan the QR codes on the posters to access specific stories.

This is an ongoing project. Interested in having your physics & astronomy story told? We encourage those who have walked down the halls of Hennings and Hebb to let us know your story.

About Humans of PHAS