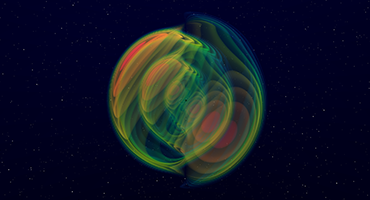 News Thumbnail Caption
A still frame from a numerical simulation of a black hole system similar to GW190412 that emits gravitational waves as it inspirals and merges into a larger black hole.
Image credit: N.L. Fischer, H. Pfeiffer, MPI, SXS.

Astrophysicists including a team at UBC have observed gravitational waves from the collision of two black holes with distinctly different masses, dubbed GW190412. This discovery gives us a glimpse of subtle harmonics in gravitational wave signals for the first time. These harmonics not only allow improved tests of Einstein’s theory of general relativity, they also allow researchers to better resolve how far away black holes are and how fast they are spinning before merging.

Gravitational waves are tiny ripples in the fabric of spacetime that carry information about the movements of massive objects in the Universe, like black holes. In 2016, the LIGO-Virgo collaboration announced the first direct detection of gravitational waves, and the first observation of two black holes orbiting each other. This system, detected in the two Advanced LIGO detectors on September 14, 2015, was composed of two black holes roughly 30 times the mass of our sun, that collided 1.4 billion light years away, released more than three solar masses of energy in a fraction of a second. In comparison, the newly discovered GW190412 was produced when black holes roughly 8 and 30 times the mass of our sun merged into a heavier black hole.

Several UBC researchers made critical contributions to the discovery of GW190412. Jess McIver, an assistant professor in Physics and Astronomy at UBC, co-leads the international LIGO Detector Characterization team responsible for data quality and verifying that events like GW190412 are truly astrophysical. “GW190412 is an exciting discovery," said Jess. "Adding this one event to the ten previously known LIGO-Virgo binary black hole mergers tells us much more about how these systems form and evolve than we knew before.”

A broad team of researchers at UBC are advancing gravitational wave science as part of the global LIGO Scientific Collaboration. Minkyun Noh and his lab are engineering components that will support quantum light squeezing in the planned LIGO A+ upgrade. Researchers in the Quantum Matter Institute, including Curtis Berlinguette, Joerg Rottler, Jeff Young, Ke Zou and their labs, are developing new materials that will allow future gravitational wave detectors to sense far into deep space. McIver’s group contributes to searches for gravitational wave signals from spinning neutron stars and recovering signals like GW190412 in addition to improving and calibrating the Advanced LIGO detectors.

Evan Goetz, a research associate in McIver’s group, played a key role in calibrating the Advanced LIGO detector data for this discovery. “The high precision calibration of Advanced LIGO detector data allowed us to observe higher-order modes in a gravitational wave signal for the first time and perform additional tests of general relativity than we could for previously discovered signals,” said Evan.