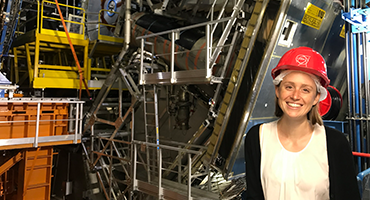 Congratulations to UBC Physics & Astronomy/TRIUMF PhD student Robin Hayes, who has received the Canadian Association of Physicists (CAP) 2021 Eric C. Svensson Memorial Graduate Scholarship. The scholarship in the amount of $3000 is awarded to a graduate student who has demonstrated both research excellence and significant service to the physics (CAP) community. This is the inaugural year for this scholarship.

Robin is recognized for "her precision measurement of the Higgs Boson coupling to W bosons and for her outstanding service as a founding member and Co-Chair of the Equity and Inclusion group in the Physics and Astronomy Department at UBC, as Chair of the Graduate Student and Postdoc Society at TRIUMF, and as a member of TRIUMF’s 20-Year Vision committee."

As part of the ATLAS experiment team at CERN's Large Hadron Collider (LHC), her work investigates the Higgs boson’s coupling to W bosons, which mediate the weak force. Along with her team, she aims to measure the cross-section of Higgs boson production at the LHC, by detecting the Higgs boson’s decay to two W bosons. Robin has been heavily involved in the physics community at her local institutes and more broadly. She takes particular interest in efforts to improve institutional support for students and postdocs, promote equity and diversity in physics, and foster public interest in fundamental research.

"I’m honoured to receive the Eric C. Svensson Memorial Scholarship," shared Robin. "It’s exciting to be recognized by a scholarship that considers contributions both to physics research and to the Canadian physics community more broadly. I think that both are important parts of being a physicist, and have been very lucky to pursue graduate studies in an environment that lets me pursue both."

Congratulations again Robin - we are so excited for you!

The CAP Foundation (CAPF) established the Eric C. Svensson Memorial Graduate Scholarship as a memorial to renowned Canadian physicist and former CAP President (1997-98), Eric Svensson, whose pioneering neutron scattering experiments at the Chalk River Laboratories demonstrated the existence of a Bose-Einstein condensate in the superfluid phase of liquid helium-4 and measured the condensate fraction.

The Svensson scholarship in the amount of $3,000 is awarded to a graduate student who has demonstrated both research excellence and significant service to the physics (CAP) community. The scholarship is awarded bi-annually, with the inaugural scholarship awarded in 2021.

ABOUT the Canadian Association of Physicists (CAP)

The Canadian Association of Physicists, founded in 1945, is a professional association representing over 1600 individual physicists and physics students in Canada, the U.S. and overseas, as well as a number of Corporate, Institutional, and Departmental Members. In addition to its learned activities, the CAP, through its charitable arm - the CAP Foundation, also undertakes a number of activities intended to encourage students to pursue a career in physics.