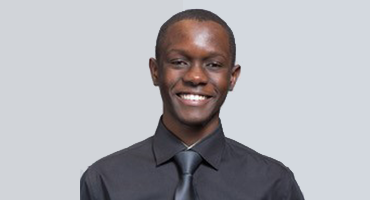 Congratulations to Engineering Physics student Brendon Tankwa, who has received a Rhodes Scholarship!

Established in 1902, it is the oldest — and likely the most prestigious — scholarship program in the world. A class of typically 100 Scholars is selected each year from around the world. As one of the two recipients for Zimbabwe, Tankwa will head to the University of Oxford next fall to pursue postgraduate studies in energy systems and business administration.

“This years candidates are among the most competitive candidates that we have ever had. The candidates represent the diversity of our country. All have outstanding academic achievements and a keen focus on transformative leadership in their communities and beyond,” said Dr. Tariro Makadzange, the Zimbabwe National Secretary of the Rhodes Trust.

“The Rhodes Scholarship is an opportunity to represent your community, improve your capacity to solve problems and join a new community that you can continue to grow with,” says Tankwa. "It inspires deep thought, and I’d encourage anyone my age to ask themselves the tough questions about how they fit into the world and how they want to leave a positive mark.”

At UBC, Tankwa has conducted research in the field of computational biology, developing models for predicting epidemics, and co-founded a start-up that builds Internet of things-based tools to help farmers manage their energy consumption.

He also received a Trek Merit Scholarship for achieving a GPA in the top five percent in his class in his sophomore year, and served as vice president of member learning at the UBC chapter of Engineers Without Borders.

“I’m working on a clean energy start-up called Audacious Energy right now,” says Tankwa about his career plans. “I think energy is one of our most pressing challenges, particularly in a world of rapid climate change. Energy enables people to do more, from the farmer trying to irrigate during a drought to the young boy who has to read by candlelight. We need more global action on this, and I plan to be part of that vanguard.”