Detection of Unruh effect a possibility 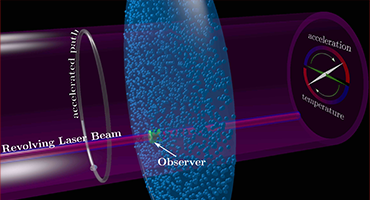 The Unruh effect, discovered in 1976 by UBC Physics & Astronomy professor William Unruh, was previously thought impossible to observe. Now, working with Unruh, a research team from the University of Nottingham’s Black Hole Laboratory and Joerg Schmidmeyer's group in Vienna might change that. Their latest work on how such an observation could be achieved using a quantum laser interferometer on sound waves in a Bose-Einstein condensate (BEC) has been published recently in the journal Physical Review Letters.

The Unruh effect combines quantum physics and the theory of relativity. It suggests that if you fly through a quantum vacuum with extreme acceleration, the vacuum no longer looks like a vacuum: rather, it looks like a warm bath full of particles. This phenomenon is closely related to the Hawking radiation from black holes.

"To observe the Unruh effect directly, as William Unruh described it, is completely impossible for us today," explains Dr. Sebastian Erne who came from the University of Nottingham to the Atomic Institute of the Vienna University of Technology as an ESQ Fellow a few months ago. “You would need a measuring device accelerated to almost the speed of light within a microsecond to see even a tiny Unruh-effect - we can't do that.” However, there is another way to learn about this strange effect: using so-called quantum simulators.

“Simulating one system with another has been especially useful for understanding black holes, since real black holes are effectively inaccessible,” Dr. Cisco Gooding, a PhD alumnus of UBC Physics & Astronomy who now works at the Black Hole laboratory, emphasizes. “In contrast, analogue black holes can be readily produced right here in the lab.”

Using a similar strategy, the authors propose that one could observe the Unruh effect by using a localized laser coupled to a Bose-Einstein condensate (BEC) - the BEC contains small irregularities (sound waves) spread out in waves, much like particles acting as disturbances in empty space. If the BEC is in a state with no such disturbances (the vacuum), an accelerating detector - in this case, a laser directed through the BEC - will detect quantum sound waves.

“Until now, the Unruh effect was an abstract idea,” says Professor Silke Weinfurtner who leads the Black Hole laboratory at the University of Nottingham. Weinfurtner was a postdoc at UBC Physics & Astronomy, where she was key in beginning the field of experimental analogue gravity experiments . “Many had given up hope of experimental verification. The possibility of incorporating a [laser phonon detector] in a quantum simulation will give us new insights into theoretical models that are otherwise not experimentally accessible."

Like LIGO (The Laser Interferometer Gravitational-Wave Observatory), the laser detector described here, which converts the phonons in the BEC into extra photons in the laser output, is set up as an interferometer, only in frequency space rather than real physical space. Unlike LIGO, it operates on the many micron scale rather than the many kilometer scale of LIGO. The acceleration is circular, rather than linear, so that the trajectory fits in that tiny scale. However, many of the key ideas used in LIGO are also applied here.