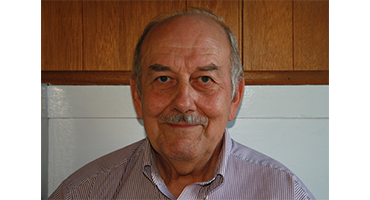 It is with great sadness that we announce the passing of David Balzarini, a former faculty member in the Department of Physics from 1968 until his retirement in 2003.

Born in Michigan in 1938, David studied at Michigan State University and completed his PhD at Columbia University before settling in Vancouver with his wife, Janet. David greatly enjoyed his 35 years of teaching, research and supporting graduate students at UBC. He was actively involved in both the Faculty Association and the CAUT, and he sat on the executive of both these organizations for many years. David was also an avid hockey fan and player. One of his proudest achievements was founding the Friday hockey group, which he continued to sponsor for many years even after he was no longer able to play, and which continues to thrive today. David was known by colleagues, family and friends alike for his creativity, his unique approach to problem-solving, his sense of humour and his ability to make friends with everyone he met. He will be greatly missed by his wife Janet, his children Eric, Sharon and Diane and their spouses, and his five granddaughters.

David’s family has arranged a Celebration of Life to be held at Cecil Green Park on Tuesday, August 27, with the memorial service beginning at 11:00 a.m. and refreshments to follow until 2:30 p.m.

In David’s memory, kindly donate to the Canadian Red Cross in lieu of flowers. For more information about his life and to share condolences and memories, please visit his obituary page.