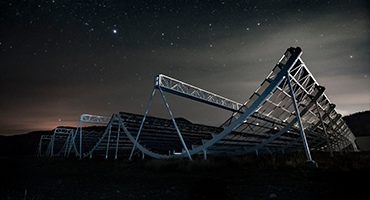 The CHIME telescope detected 535 new fast radio bursts during its first year of operation – from 2018 to 2019 – quadrupling the number of known occurrences of the puzzling pulses of radio energy from far outside our galaxy.

Scientists with the CHIME (Canadian Hydrogen Intensity Mapping Experiment) collaboration are presenting a catalogue of the year of fast radio burst (FRB) signals today at the American Astronomical Society meeting.

"This catalogue marks a significant turning point in the FRB field,” says Bradley Meyers, a postdoctoral researcher at the University of British Columbia (UBC) department of physics and astronomy and member of the CHIME collaboration.

“We’re now firmly in the regime where robust analyses can be used to investigate properties of FRBs as a population, rather than on an individual basis. There's a huge amount of science that we can do with this catalogue, and I think a lot of it will be exploring ideas we haven't even come up with yet."

The expanded number of observations has helped researchers identify two very different types of bursts—those that repeat, and those that are one-offs. Only 18 FRB sources burst repeatedly, while the vast majority were one-offs. Repeaters look different, lasting slightly longer and emitting more focused radio frequencies than bursts from non-repeating FRBs.

“Before CHIME, there were less than 100 total discovered FRBs. Now, after one year of observation, we’ve discovered hundreds more,” says CHIME member Kaitlyn Shin, a graduate student in MIT’s department of physics. “With all these sources, we can really start getting a picture of what FRBs look like as a whole, what astrophysics might be driving these events, and how they can be used to study the universe going forward."

The Canadian Hydrogen Intensity Mapping Experiment radio telescope was designed and built by scientists at the University of British Columbia, McGill University, the University of Toronto, the Perimeter Institute for Theoretical Physics and the National Research Council of Canada. The telescope is located in the mountains of British Columbia’s Okanagan Valley at the NRC’s Dominion Radio Astrophysical Observatory near Penticton.

Unlike traditional telescopes, CHIME has no moving parts: It uses over a thousand antennas to record the information from all the radio waves falling across its surface. The telescope receives radio signals each day from half of the sky as the Earth rotates.

“Digital signal processing is what makes CHIME able to reconstruct and ‘look’ in thousands of directions simultaneously,” says Kiyoshi Masui, assistant professor of physics at MIT, who will lead CHIME’s AAS conference presentation. “That’s what helps us detect FRBs a thousand times more often than a traditional telescope.”

FRBs—first observed in 2007—are brief and mysterious radio pulses that have been emanating from various and distant parts of the universe, and more recently within the Milky Way.

"We're extremely excited to share this catalogue with the rest of the FRB community,” says Deborah Good, a PhD researcher at UBC physics and astronomy and CHIME member. “The story doesn't end with the release of the catalogue. I know researchers around the globe are going to use this as the jumping off point for really exciting analyses."

This research was supported by various institutions including the Canada Foundation for Innovation, the Dunlap Institute for Astronomy and Astrophysics at the University of Toronto, the Canadian Institute for Advanced Research, McGill University and the McGill Space Institute via the Trottier Family Foundation, and UBC.

A version of this story originally appeared on the UBC News website.