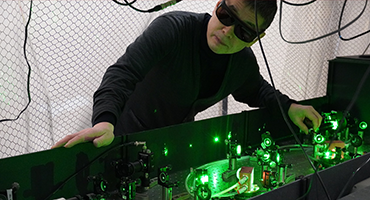 News Thumbnail Caption
Takamasa Momose poses with the laser system at UBC. The main components of the system were designed and built by Momose and students in his lab. Credit: Takamasa Momose

An international group of researchers at CERN’s ALPHA collaboration, including UBC Physics & Astronomy scientists, have successfully cooled antimatter using lasers for the first time. This achievement, published today and featured on the cover of the journal Nature, details the cooling of antihydrogen to near absolute zero with a laser system developed by a team led by Dr. Takamasa Momose, (UBC, Chemistry and Physics & Astronomy, TRIUMF Affiliated Scientist). Dr. Walter Hardy, professor emeritus in UBC Physics & Astronomy, and his PhD student Nathan Evetts, also played a key role by using their microwave techniques to help control the quantum state of the antihydrogen to allow for its cooling.

“Today’s results are the culmination of a years-long program of research and engineering, conducted at UBC but supported by partners from across the country,” said Dr. Momose. “With this technique, we can address long-standing mysteries like: ‘How does antimatter respond to gravity? Can antimatter help us understand symmetries in physics?’. These answers may fundamentally alter our understanding of our Universe.”

“It was a bit of crazy dream to manipulate antimatter with laser,” said Dr. Makoto Fujiwara, ALPHA-Canada spokesperson, TRIUMF scientist, and the original proponent of the laser cooling idea. “I am thrilled that our dream has finally come true as a result of tremendous teamwork of both Canadian and international scientists.” Fujiwara is also a UBC Physics & Astronomy graduate program alumnus.

Antimatter particles are identical to matter particles, but they possess opposite charges. Antihydrogen, the simplest antiatom, is composed of one positron and one antiproton, the antiparticles of electron and proton respectively. Antiatoms are exceptionally hard to create, confine and manipulate due to matter-antimatter annihilation. Theories suggest that matter and antimatter should have existed in equal amounts after the Big Bang, though the reason why our Universe, today, is comprised almost entirely of matter remains a great mystery. 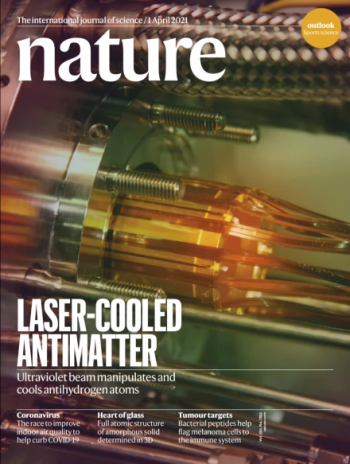 Nature featuring this antimatter breakthrough on its cover

The so-called Doppler laser cooling had been previously applied to neutral atoms, but this marks the first demonstration of laser cooling of antimatter. This method takes advantage of momentum conservation where the momentum of photons is transferred to antihydrogen upon contact which reduces the velocity of these particles, in turn lowering their temperature. It had been believed that the photon-antimatter momentum exchange is the same as that for photon-matter, though prior to the results published in Nature, no experimental evidence had been obtained to confirm the photon-antimatter momentum exchange driven by laser photons.

10 years after successfully confining antihydrogen for 1000 seconds, the ALPHA collaboration has achieved the world’s first cooling of these particles down to near absolute zero using lasers. In 2018, the ALPHA collaboration was able to excite an important atomic transition of hydrogen, the Lyman-α transition, in antihydrogen which ultimately paved the way for laser cooling of this antiatom.

The findings of this work are impactful since a colder and denser sample of antihydrogen can be trapped for a long duration of time which will enhance spectroscopic and gravitational studies of antimatter. This will aid in answering the long-standing question of gravitational influence on antimatter and why the matter-antimatter asymmetry exists.

Momose and Fujiwara are now leading a new CFI project, dubbed HAICU, to develop new quantum techniques for antimatter studies. “My next dream is to make a “fountain” of anti-atoms by tossing the laser-cooled antimatter into free space. If realized, it would enable an entirely new class of quantum measurements that were previously unthinkable,” said Fujiwara. “Furthermore, we are one step closer to being able to manufacture the world's first antimatter molecules by joining anti-atoms together using our laser manipulation technology,” said Momose.

ALPHA (Antihydrogen Laser Physics Apparatus) is an international collaboration based at CERN, and which is working with trapped antihydrogen atoms, the antimatter counterpart of the simplest atom, hydrogen. By precise comparisons of hydrogen and antihydrogen, the experiment hopes to study fundamental symmetries between matter and antimatter.

The Canadian effort was led by researchers and students from ALPHA-Canada (TRIUMF, UBC, Simon Fraser University, the University of Calgary, and York University) and contributors the University of Victoria and BCIT. The cooling laser system at 121.6 nm was developed and operated by the ALPHA -Canada team. 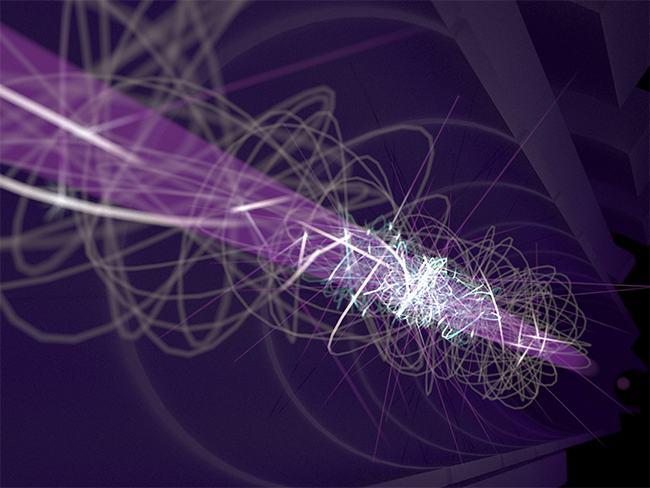 Artistic illustrations of the movement of an antihydrogen atom in the ALPHA magnetic trap,before and after
laser cooling (in grey before, and blue after.) The images show various lengths of the antihydrogen’s tracks.
Credit: Chukman So. 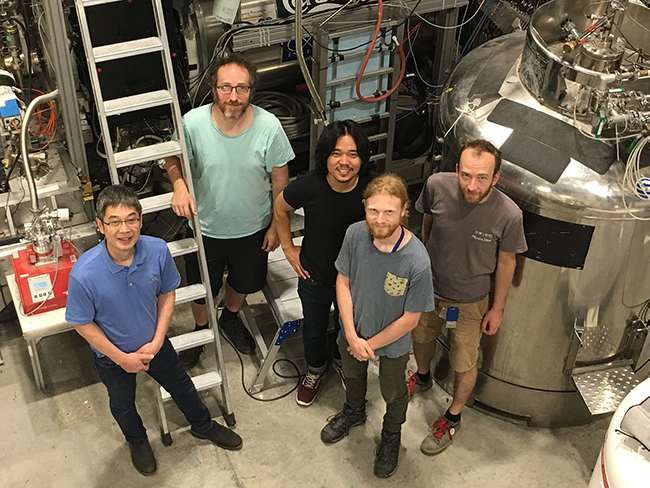 ALPHA-Canada laser team in front of the trap chamber:
(from left to right) T. Momose, R. Colister, M. Fujiwara, A. Thibeault, and A. Khramov 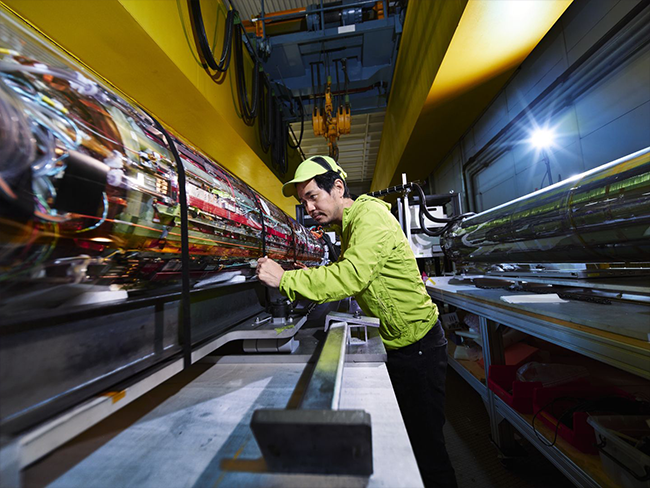