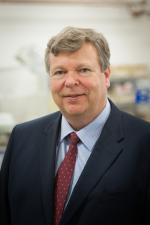 Lorne A. Whitehead received a Ph.D. in Physics from the University of British Columbia and is also a Professional Engineer. His career has involved sustained innovation in technology, business, and administration. From 1983 to 1993 he served as CEO of TIR Systems, a UBC spin-off company that he founded and which eventually grew to 200 employees prior to being purchased by Philips in 2007.

He has been a faculty member at UBC since 1994.  As a Professor in the Department of Physics and Astronomy, he carries out studies of the optical, electrical, and mechanical properties of micro-structured surfaces, a field in which he holds more than 140 US patents and numerous international counterpart patents. His technology is used in many computer screens and televisions.  He has also helped to start six additional new companies – Sonigistix, Brightside (purchased by Dolby Laboratories), Boreal Genomics, SunCentral, CLEARink Displays, and Elix Wireless Systems.

In addition to his research at UBC, Dr. Whitehead has held a number of administrative positions including Associate Dean, Dean pro tem, Vice-President Academic and Leader of Education Innovation.  He is currently UBC’s Special Advisor on Innovation, Entrepreneurship and Research. In this capacity, he cofounded in 2013 the Bay View Alliance (a group of twelve major research universities collaborating on applying improvement science to the challenges of leadership in advancing pedagogical effectiveness), served as its Director until 2021, and currently serves on its management group as Immediate Past Director. He is currently the Director of the HIBAR Research Alliance, a network of organizations partnering to catalyze the emergence of an improved academic culture that yields more and better Highly Integrative Basic and Responsive, or HIBAR, research while improving academic excellence. Dr. Whitehead has also served on the Boards of several non-profit organizations and is currently a member of the Board of Administration of the Commission Internationale de L’Eclairage, based in Vienna.

His research focuses on the application of novel geometrical approaches to applied physics challenges, with a focus on the interactions of electromagnetic fields with microstructures. In addition to the usual scientific publications, largely in journals such as Applied Optics and the Journal of the Illuminating Engineering Society, this work has generated a large number of patents and, perhaps most importantly, license agreements with industry that have resulted in a significant amount of commercial activity. Five important areas of contribution are:

Prism Light Guide (US Pat. #4,260,220 and additional publications and patents)

He initiated this field of research with the invention of the Prism Light Guide, the first optical design to enable light to be piped efficiently and cost effectively in large hollow structures, with the primary application being illuminating engineering applications. This technology led to his founding of the spinoff company TIR Systems Ltd., which grew steadily since its incorporation, and reached about 200 employees in Vancouver when it was acquired in 2007 by Philips Electronics.  One spin-off technology resulting from this work was a microstructured film capable of doubling the brightness of a computer display.  3M Company purchased this intellectual property from UBC and used it to develop their “brightness enhancement film” product line, incorporated into most laptop and flat panel displays. His research regarding new light guiding technology is ongoing.

CLEAR Display (US Patent #5,959,777 and additional publications and patents)

This invention is a fundamental new technique for electrically modulating the reflectance of a surface. The CLEAR Display uses a unique microstructure involving total internal reflection to produce a high brightness and excellent contrast by frustrating TIR through a variety of electro-optic techniques. The technology was licensed by UBC to a new company, CLEARink Displays, for commercial development.

HDR Display (US Patent #6,891,672 and additional publications and patents)

This invention is a new technique for producing light-emitting electronic images, which addresses a fundamental limitation of all previous image modalities. This new device uses a hybridization of a low resolution, extremely bright image formed using the latest generations of light emitting diodes, with a conventional colour liquid crystal display and novel control software, to achieve a full dynamic image display range. The technology was licensed to UBC start-up company Brightside Technologies, and the company was acquired in 2007 by Dolby Laboratories. Many televisions today incorporate this technology.

Core Sunlighting US Patent #8,611,011 and additional publications and patents)

This invention involves a system that demonstrates, for the first time, both the feasibility and cost-effectiveness of a core sunlighting system that guides direct sunlight deep into the interior of a building, thereby reducing the amount of electrical energy required for lighting. UBC licensed the technology to SunCentral Inc., a Vancouver-based company incorporated to develop commercial systems based on the technology.

SCODA (US Patent #8,480,871 and additional publications and patents)

This invention is a novel, general principle for achieving 2D or 3D concentration via electrophoresis in alternating electric fields, based on temporal alteration of the coefficient of drag in synchronization with the applied electric field. The acronym SCODA (synchronous coefficient of drag alteration) is used to describe this principle. Through a multidisciplinary research collaboration with Dr. Andre Marziali at UBC, this technique has been shown to enable extremely high concentration of DNA molecules in solution. Dr. Marziali and colleagues launched a company, Boreal Genomics, to commercialize this technology.