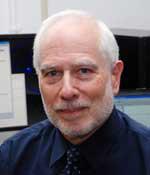 Invitation Fellow, Japan Society for the Promotion of Science, 2009

Professor Douglas Bryman, J. B. Warren Chair. Particle Physics. My research in particle physics is aimed at understanding the “generation puzzle” – the confounding existence of three versions of the fundamental quarks and leptons such as the electron, muon and tau lepton. Aspects under study include the universality of interactions, suppression of generation-changing neutral currents, precisely testing Standard Model hypotheses, and searching for new effects such as the existence of high mass scales, new particles, and new interactions. Orders of magnitude improvements in sensitivity have been achieved by studying extremely rare processes which provide tight constraints on the existence of new physics effects. Important reactions have been discovered in the course of this work. The  PIENU experiment at TRIUMF measures the branching ratio of pion decays to electrons and to muons. This challenging experiment, tests the hypothesis that the muon is merely a heavy electron and provides the best test of the Standard Model hypothesis of the universality of the weak interactions. High precision measurements of rare pion decays are also extremely sensitive to the existence of new particles and interactions hypothesized in many current theories and to  the possible existence  of heavy sterile neutrinos.  We are currently developing a new experiment PIONEER to improve  the precision by an order of magnitude for rare pion decays to electrons compared to muons as well as for pion beta decay. PIONEER will run at the Paul Scherrer Institut in Switzerland.

We are also actively participating in the rare kaon decay experiment NA62 at CERN  aiming to accurately measure the ultra-rare  "golden" decay K+->pi+ nu nubar  which occurs at a rate of one in a billion decays. NA62 is aimed at  sensitively searching for new physics at very high mass scales by comparing the precise theoretical prediction with experimental observation. NA62 also studies many other interesting rare pion and kaon decays and is developing a new search for hidden sector or dark matter particles.

Particle physics experiments which stretch the boundaries of current knowledge often require the development of new instruments which have subsequently found applications in other fields such as radiation medical imaging and geophysical imaging.  My research group has specialized in the development of state-of-the-art detectors including particle tracking detectors like drift chambers and time projection chambers, and high speed electronics like 500 MHz GaAs CCD digitizers. We are currently engaged in detector R&D  involving liquid krypton calorimetry and Si pixel tracking.

Constraints on sterile neutrinos in the MeV to GeV mass range