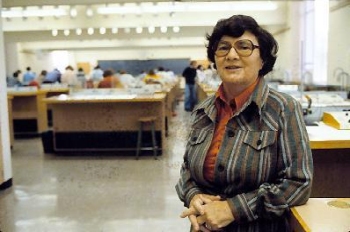 Betty Howard was very proud of being in charge of
administering all the first year physics labs.

Betty Howard (née Hunt) was born in England in 1923. She studied low temperature physics at Oxford, and was awarded her DPhil in 1952 for a thesis on spin-spin interaction in solids. Betty also worked on the classifield “Tube Alloys” project to develop nuclear weapons during WWII. She immigrated to Canada in 1953 and worked at UBC from 1959-1988. Betty was the first woman faculty member in the Department of Physics and was an officer of the Canadian Association of Physicists, the American Association of Physics Teachers, and the BC Science and Technology Centre.

This article is part of the 100 Years of Physics at UBC series. The article and its corresponding poster are prepared by Kara Deane, Theresa Liao, and Chris Waltham. Download poster png.

Betty attended the Grammar School for Girls, King’s Norton (Birmingham) from 1934-1941. She went on to study as an Exhibitioner (meaning she was awarded a scholarship) at Royal Holloway College at the University of London from 1941-1944. She earned a BSc (Hons) General Physics and Maths in 1943 and a BSc (Hons) Special Physics in 1944. She returned to university from 1946-1949 as a graduate student studying low temperature physics at Somerville College, Oxford and went on to receive her DPhil (PhD) from Oxford University in 1952. 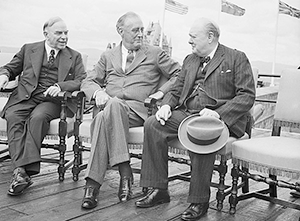 From 1944-1946, Betty worked on isotope separation for the Tube Alloys project at Oxford Univerisity’s Clarendon Lab. Her work there was confidential, as “Tube Alloys” was the deliberately misleading codename for the highly secret atomic weapons project undertaken by the United Kingdom with participation from Canada during World War II. The Tube Alloys directorate was established in November 1941 as the first nuclear weapons project. At the Quebec Summit in August 1943, an agreement was reached between Britain and the US, and Tube Alloy’s focus was shifted to supporting the Manhattan Project. Betty joined Tube Alloys after this agreement had been made and worked there through the end of World War II. The formation of Tube Alloys and other atomic weapons projects was motivated by the work of Otto Frisch and Rudolf Peierls who produced a method for creating a “super bomb” using uranium-235 isotopes. The primary objective of Betty and the other scientists working on the Tube Alloys project was to separate fissile uranium-235 from the much more plentiful non-fissile uranium-238. At the time, research was conducted into two main methods of performing this separation: gaseous diffusion and electromagnetic forces. 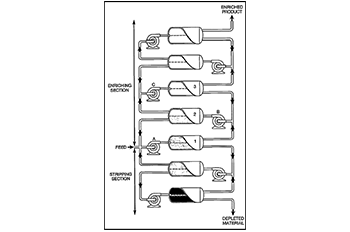 Isotopic Separation by Gaseous Diffusion: In gaseous diffusion, uranium hexaflouride gas containing uranium-235 and uranium-238 is propelled through a porous membrane. The mass difference between the uranium isotopes causes uranium-235 to travel faster at a given temperature than uranium-238, therefore uranium-235 impacts the membrane more frequently and has a higher probability of passing through. This diffusion step has to be repeated many times until pure enough uranium-235 is separated out. Top image: the gaseous diffusion process of isotopic separation; image retrieved via The Atomic Heritage Foundation. 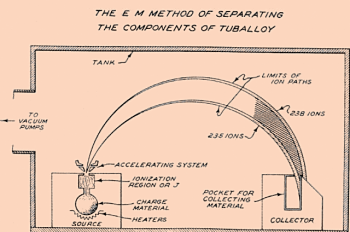 Isotopic Separation by Electromagnetic Forces: Electromagnetic isotopic separation uses a mass spectrometer to send a stream of uranium isotopes through a magnetic field. Since uranium-235 is lighter than uranium-238, it undergoes a greater degree of deflection by the magnetic field. This results in a separate stream for each so they can be collected by separate receivers. Bottom image: Schematic diagram of uranium isotope separation in a calutron; image retrieved via Wikipedia, public domain.

From 1949-1950, Betty was funded by the International Federation of University Women Fellowship to research low temperature physics at the Kamerlingh Onnes lab in Leiden, Netherlands. She then worked as a Senior Scientific Officer at the UK Atomic Energy Research Establishment for two years before earning her DPhil at Sommerville College, Oxford. Betty’s thesis topic was “an experimental study of spin-spin interaction in solids”. 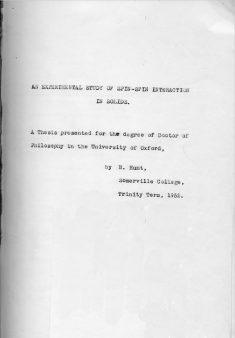 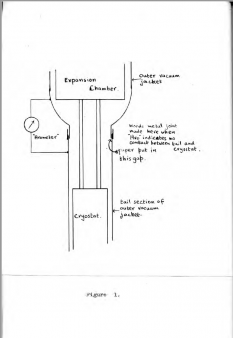 The cover of Betty’s DPhil thesis and a diagram of her technique for ensuring thermal isolation of a cryostat. (Courtesy of Roger Howard)

Betty immigrated to Canada in 1953. In 1959, she joined the UBC Physics Department as a Demonstrator, a role she held until 1963. She then worked as a Lecturer (1963-1964), an Instructor II (1964-1965), and an Assistant Professor (1965-1988). Her assistant status was maintained until her retirement, even though she worked in the UBC Physics Department for almost 30 years and as an Assistant Professor for over 20 years. She served on the UBC Senate as a Representative of the Joint Faculties from 1972 to 1975 and was involved with timetable organization and registration for first year Science students. Betty Howard was the first woman faculty member in the Department. 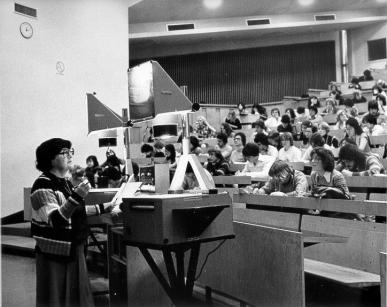 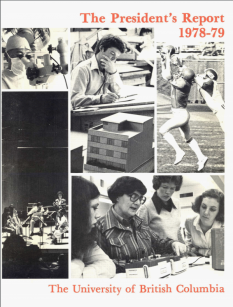 Betty retired from UBC in 1988 as an Assistant Professor Emerita of Physics and Astronomy. She then worked for the Open University and at the Vancouver Museum as a docent in the school achaeology program. Betty was diagnosed with parkinsonism in 1995 and passed away in 2003.