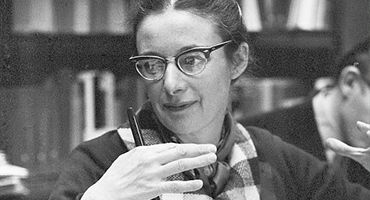 Anne Underhill was a pioneer in the observation and understanding of the interior dynamics of hot, massive, short-lived "OB" stars. She completed her bachelor and master degrees at UBC. After a very productive career in astrophysics, she retired and returned to UBC as an Honorary Professor.

This article is part of the 100 Years of Physics at UBC series. The article and its corresponding poster are prepared by Kara Deane, Theresa Liao, and Chris Waltham. Download poster png.

Anne Underhill was born in Vancouver in 1920. She was the only girl of five children, and her parents were some of the earliest Europeans to immigrate to BC. She graduated as one of the top students in the province, and was awarded the Lieutenant Governor’s medal for her academic achievements. Anne’s mother passed away when she was 18. As the only female child, Anne was required to take care of her family’s household while attending UBC.

Anne received a BA in Honours Chemistry and Physics from UBC in 1942. She went on to receive an MA in Physics and Math in 1944. While Anne was a graduate student, the UBC Physics Department was asked to provide courses for air force members. It was customary for graduate students at Anne’s level to run lab courses, but there was some concern about having a female graduate student instructing air force men. Anne’s father was acquainted with Gordon Shrum, the Head of the Physics Department at the time, so Anne spoke to Shrum and assured him that “having lived with four brothers, [she] could handle the undergraduate men.”

When Anne completed her MA during WWII, graduates in physics couldn’t leave Canada because their specialization was needed for the war effort. Instead of attending PhD studies in California, as was common for physicists from the west coast, Anne got a summer job at the Dominion Astrophysical Observatory (DAO) in Victoria, BC. She worked as a secretary/technical officer and enjoyed it so much that she decided to specialize in astrophysics. She received a significant scholarship from the Canadian Federation of University Women and enrolled at the University of Toronto. However, staff at the astrophysics program didn't have the expertise to operate their telescope. Anne wanted to learn, but was refused, as she was a woman graduate student. While she eventually made arrangements to use the telescope, she left U of T after only one year, moving on to work for the National Research Council (NRC) in Montreal as a spectroscopist.

After the war, she enrolled at the University of Chicago - considered then the best option for astrophysics - for PhD studies. Her thesis described the first model for multi-layered stellar atmospheres and was supervised by future Nobel Laureate Subrahmanyan Chandrasekhar. Anne received her PhD in 1948, and was elected as a member of the Royal Astronomical Society of Canada in the same year. 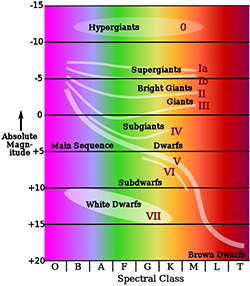 Multi-Layered Stellar Atmospheres: The stellar atmosphere refers to the surface layers of a star, or the interface between dense stellar interior and interstellar space. Emitted photons interact with the atmospheric material, producing an observable stellar spectrum. Analyzing this spectrum gives insight into the chemical and physical properties of the star. Note that OB Giants are at the top left of the plot. Image credit: Rursus, retieved via Wikipedia, used under CC BY-SA 3.0.

After a year of post-doctoral studies in Copenhagen, Anne returned to the DAO as one of 5 PhDs and the only woman on the professional staff. She recalled some interactions with her co-workers as unpleasant. “[A]fter I had been on staff for about five years, we hired some young men. They weren’t that well qualified - one didn’t even have a PhD - but the men took to them and started giving them more responsibility than I had. The favouritism bothered me because I knew I could wipe the floor with them”. During her time at the DAO, she worked as a visiting professor at Princeton and Harvard Universities. She used the 72-inch telescope at the DAO to collect data on “early-type” or “OB” stars. At this time, there was no model to interpret her data so Anne developed one herself, using Princeton and Harvard’s computing facilities to write the codes for some of the first radiative transfer models. 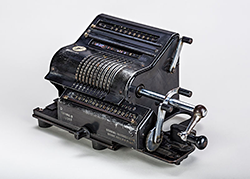 Radiative Transfer Models: Electromagnetic radiation emitted from stars undergoes interactions as it travels to the place where it is observed. As the radiation travels, it may interact with a medium, such as the Earth’s planetary atmosphere, via absorption, emission, or scattering. These models refer to how the radiation gets out of the stars. Brunsviga calculating machines, similar to the one here, to perform numerical calculation of her models. Photo by CEphoto, Uwe Aranas.

OB Assocations: Early type stars are hot stars belonging to the spectral type classifications O, B, A, and F0-F5. O and B stars specifically are early-type stars which are hot, massive, and have short lifespans. They emit large amounts of UV radiation and can form clusters called “OB associations.” Image by LucasVB, retrieved via Wikipedia, used under CC BY-SA 3.0.

In 1962, Anne started at Utrecht University (Netherlands) as a full professor, and lectured at the graduate level. While Anne was the only women in the department, she got along well with her colleagues. While at Utrecht University, Anne supervised several PhD students and continued her work on OB stars. In 1966, she wrote “The Early Type Stars”, which became a benchmark work in the field and the standard reference for OB stars. In 1969, Anne received an honorary DSc from York University.

"Black Corpse Radiation": Anne tried to learn Dutch, and often started her lectures in Dutch but would switch to English. When she talked about black body radiation, her Dutch translation came out as “black corpse radiation,” which entertained her students so much that they never corrected her.
Left: Book cover of "The Early Type Stars." Right: Anne Underhill at the Utrecht University. Photo by Rob Rutten, used under CC BY-SA 4.0

In 1970, Anne joined NASA’s Goddard Space Flight Center as the Director of the new Optical Astronomy Laboratory at a time when NASA’s work was very important to the United States. Of working at Goddard, Anne said “Goddard had some very good scientists and a broad outlook. They didn’t care whether you were a man or a woman; they just wanted to know you could do the job”. Her objective was to develop the rockets and satellites to observe astronomical objects from space. Anne worked on the International UV Explorer Satellite until 1977, and then returned to work on OB stars as a Senior Scientist. She collaborated on several books on astronomy, including “O-Stars and Wolf Rayet Stars” and “B Stars With and Without Emission Lines”.

In 1985, Anne retired from NASA, and returned to Vancouver as an Honorary Professor at UBC. Anne was inducted as a Fellow of the Royal Society of Canada in 1985 and received an honorary DSc from UBC in 1992.